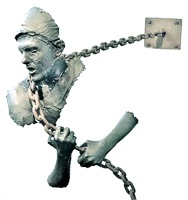 Absurdism is a philosophy stating that the efforts of humanity to find inherent meaning in the universe ultimately fail (and hence are absurd), because no such meaning exists, at least in relation to the individual. "The Absurd," therefore, is commonly used in philosophical discourse to refer to the clash between the human search for meaning and the human inability to find any. In this context absurd does not mean "logically impossible," but rather "humanly impossible."

Absurdism is very closely related to existentialism and nihilism and has its origins in the 19th century Danish philosopher, Søren Kierkegaard, who chose to confront the crisis humans faced with the Absurd by developing existential philosophy. Absurdism as a belief system was born of the European existentialist movement that ensued, specifically when the French Algerian philosopher and writer Albert Camus rejected certain aspects from that philosophical line of thought and published his manuscript The Myth of Sisyphus. The aftermath of World War II provided the social environment that stimulated absurdist views and allowed for their popular development, especially in the devastated country of France.[1]