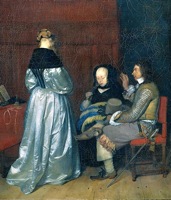 Admonition (or "being admonished") is a punishment under Scots law when an offender has been found guilty but is neither imprisoned nor fined but receives a verbal warning and is afterwards set free; the conviction is still recorded. This can be compared to an absolute discharge where a conviction is not recorded.

It is usually the result of either the strict application of law where no real wrong has been caused or where other circumstances (e.g. time already spent in custody or attending court) make further punishment unjust in the circumstances specific to the case involved.

Jacqueline Tombs (2004). A unique punishment Sentencing and the Prison Population in Scotland. Scottish Consortium on Crime & Criminal Justice. p. 76. http://www.scccj.org.uk/documents/A_Unique_Punishment.pdf. "Admonition – means that the offender receives a warning from the court and a conviction."