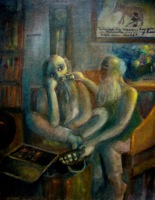 An antidote is a substance which can counteract a form of poisoning. The term ultimately derives from the Greek αντιδιδοναι antididonai, "given against".

The antidotes for some particular toxins are manufactured by injecting the toxin into an animal in small doses and extracting the resulting antibodies from the host animals' blood. This results in an antivenom that can be used to counteract poison produced by certain species of snakes, spiders, and other venomous animals. A number of venoms lack a viable antivenom, and a bite or sting from an animal producing such a toxin often results in death. Some animal venoms, especially those produced by arthropods (e.g. certain spiders, scorpions, bees, etc.) are only potentially lethal when they provoke allergic reactions and induce anaphylactic shock; as such, there is no "antidote" for these venoms because it is not a form of poisoning and anaphylactic shock can be treated (e.g., by the use of epinephrine).

Some other toxins have no known antidote. For example, the poison aconitine, a highly poisonous alkaloid derived from various aconite species has no antidote, and as a result is often fatal if it enters the human body in sufficient quantities