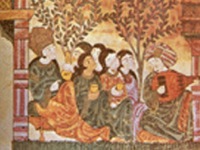 b : a state with such a government

Aristocracy is a form of government in which a few of the most prominent citizens rule. The term is derived from the Greek aristokratia, meaning "rule of the best". The term "aristocracy" (ἀριστοκρατία) was first given in Athens to young citizens (the men of the ruling class) who led armies from the front line. Because military bravery was highly regarded as a virtue in ancient Greece, it was assumed that the armies were being led by "the best". From the ancient Greeks, the term passed on to the European Middle Ages for a similar hereditary class of military leaders often referred to as the "nobility".

As in ancient Greece, this was a class of privileged men whose military role allowed them to present themselves as the most "noble", or "best".The concept evolved where by a council of these citizens was commonly used and contrasted with monarchy, in which an individual king held the power. Later, aristocracies primarily consisted of an elite aristocratic class, privileged by birth and wealth. Since the French Revolution, aristocracy has generally been contrasted with democracy, in which all citizens hold some form of political power.