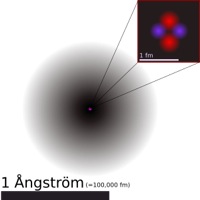 This illustrates the nucleus (pink) and the electron cloud distribution (black) of the Helium atom. The nucleus (upper right) is in reality spherically symmetric, although this is not always the case for more complicated nuclei.

Middle English, from Latin atomus, from Greek atomos, from atomos indivisible, from a- + temnein to cut which means uncuttable, or indivisible, something that cannot be divided further.

The atom is a basic unit of matter that consists of a dense central nucleus surrounded by a cloud of negatively charged electrons. The atomic nucleus contains a mix of positively charged protons and electrically neutral neutrons (except in the case of hydrogen-1, which is the only stable nuclide with no neutrons). The electrons of an atom are bound to the nucleus by the electromagnetic force. Likewise, a group of atoms can remain bound to each other by chemical bonds based on the same force, forming a molecule. An atom containing an equal number of protons and electrons is electrically neutral, otherwise it is positively or negatively charged and is known as an ion. An atom is classified according to the number of protons and neutrons in its nucleus: the number of protons determines the chemical element, and the number of neutrons determines the isotope of the element.

Chemical atoms, which in science now carry the simple name of "atom," are minuscule objects with diameters of a few tenths of a nanometer and tiny masses proportional to the volume implied by these dimensions. Atoms can only be observed individually using special instruments such as the scanning tunneling microscope. Over 99.94% of an atom's mass is concentrated in the nucleus, with protons and neutrons having roughly equal mass. Each element has at least one isotope with an unstable nucleus that can undergo radioactive decay. This can result in a transmutation that changes the number of protons or neutrons in a nucleus. Electrons that are bound to atoms possess a set of stable energy levels, or orbitals, and can undergo transitions between them by absorbing or emitting photons that match the energy differences between the levels. The electrons determine the chemical properties of an element, and strongly influence an atom's magnetic properties. The principles of quantum mechanics have been successfully used to model the observed properties of the atom.[1]