From Nordan Symposia
Revision as of 18:16, 26 January 2016 by Rdavis (talk | contribs) (Created page with "File:lighterstill.jpgright|frame ==Definition== *1: an ancient region of Mesopotamia, formed when the kingdoms of Akkad in the nort...")
(diff) ← Older revision | Latest revision (diff) | Newer revision → (diff)
Jump to navigationJump to search 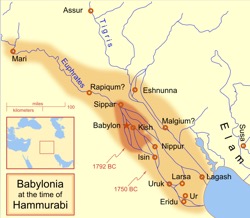 Babylonia was an ancient Akkadian-speaking Semitic state and cultural region based in central-southern Mesopotamia (present-day Iraq). A small Amorite-ruled state emerged in 1894 BC, which contained at this time the minor city of Babylon. Babylon greatly expanded during the reign of Hammurabi in the first half of the 18th century BC, becoming a major capital city. During the reign of Hammurabi and afterwards, Babylonia was called Mât Akkadî "the country of Akkad" in Akkadian.

It was often involved in rivalry with its older fellow Akkadian state of Assyria in northern Mesopotamia. Babylonia briefly became the major power in the region after Hammurabi (fl. c. 1792 – 1752 BC middle chronology, or c. 1696 – 1654 BC, short chronology) created a short-lived empire, succeeding the earlier Akkadian Empire, Neo-Sumerian Empire, and Old Assyrian Empire; however, the Babylonian empire rapidly fell apart after the death of Hammurabi. The Akkadian Empire fell to the Babylonian Empire later on.

The Babylonian state retained the written Semitic Akkadian language for official use (the language of its native populace), despite its Amorite founders and Kassite successors not being native Akkadians, and speaking a Northwest Semitic Canaanite language and an unclassified language isolate. It retained the Sumerian language for religious use (as did Assyria), but by the time Babylon was founded this was no longer a spoken language, having been wholly subsumed by Akkadian. The earlier Akkadian and Sumerian traditions played a major role in Babylonian (and Assyrian) culture, and the region would remain an important cultural center, even under protracted periods of outside rule.

The earliest mention of the city of Babylon can be found in a tablet from the reign of Sargon of Akkad (2334–2279 BC), dating back to the 23rd century BC. Babylon was merely a religious and cultural centre at this point and neither an independent state nor a large city; like the rest of Mesopotamia, it was subject to the Akkadian Empire which united all the Akkadian and Sumerian speakers under one rule. After the collapse of the Akkadian empire, the south Mesopotamian region was dominated by the Gutians for a few decades before the rise of the Neo-Sumerian Empire (third dynasty of Ur), which, apart from northern Assyria, encompassed the whole of Mesopotamia, including the city of Babylon.[1]

The Babylonians, because of immediate contact with the remnants of the civilization of the Adamites, enlarged and embellished the story of man’s creation; they taught that he had descended directly from the gods. They held to an aristocratic origin for the race which was incompatible with even the doctrine of creation out of clay. (74:8.6)