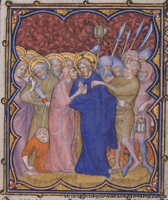 Middle English, from be- + trayen to betray, from Anglo-French trahir, from Latin tradere — more at traitor

For lessons on the topic of Betrayal, follow this link.

b : show, indicate
c : to disclose in violation of confidence <betray a secret>intransitive verb : to prove false

Betrayal is the breaking or violation of a presumptive social contract, trust, or confidence that produces moral and psychological conflict within a relationship amongst individuals, between organizations or between individuals and organizations. Often betrayal is the act of supporting a rival group, or it is a complete break from previously decided upon or presumed norms by one party from the others. Someone who betrays others is commonly called a traitor or betrayer. Betrayal is also a commonly used literary element and is often associated with or used as a plot twist.

Most adults living in democracies place trust in the state of which they are a citizen. If this trust is betrayed, at its worst, the individual can suffer psychological betrayal trauma. Betrayal trauma has symptoms similar to post traumatic stress disorder, although the element of amnesia and dissociation is likely to be greater. The key difference between traditional post traumatic stress disorder (PTSD) and betrayal trauma is that the former is historically seen as being caused primarily by fear, whereas betrayal trauma is a response to extreme anger. Fear and anger are the two sides to the fight-flight response, and as such are our strongest and most basic psychological emotions.

Pure political betrayal trauma can be caused by situations such as wrongful arrest and/or conviction; or by discrimination, bullying or other serious mistreatment by a state institution or powerful figure within the state.

In practice, however, it is likely that most people with symptoms of psychological trauma have elements of both fear based PTSD and anger based betrayal trauma, not one or the other. Certainly in the most serious cases of PTSD there is an element of both. For instance, the fact that a soldier is sent to war by the state is an important element in the reasons for war being a major cause of PTSD. In cases where soldiers are horrified by the actions or orders of their commanding officers, or where they are victims of friendly fire, their PTSD is likely to be worse because of the element of betrayal will be that much greater. Similarly, one of the most psychologically traumatising events in history, the Holocaust, is almost certainly so serious a case because the element of state betrayal is as great as the element of fear trauma.