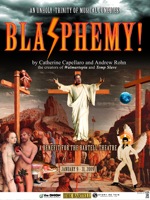 b : the act of claiming the attributes of deity

For lessons on the topic of Blasphemy, follow this link.

Blasphemy is irreverence toward holypersonages, religious artifacts, customs, and beliefs. The Abrahamic religions condemn blasphemy vehemently. Some countries have laws to punish blasphemy, while others have laws to give recourse to those who are offended by blasphemy. Those laws may discourage blasphemy as a matter of blasphemous libel, vilification of religion, religious insult, or hate speech. The idea of blasphemy makes the word amenable to colloquial usage.

Sometimes the word "blasphemy" is used loosely to mean any profane language, for example: "With much hammering and blasphemy, the locomotive's replacement spring was finally fitted."