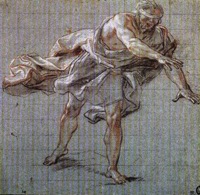 b : of or relating to sightless persons

b : lacking a directing or controlling consciousness <blind chance>
c : drunk 1a

b : having no knowledge of information that may cause bias during the course of an experiment or test <physicians blind to whether the test drug is administered>

b : lacking a complete or legible address <blind mail>

Blindness is the condition of lacking visual perception due to physiological or neurological factors.

Various scales have been developed to describe the extent of vision loss and define blindness. Total blindness is the complete lack of form and visual light perception and is clinically recorded as NLP, an abbreviation for "no light perception." Blindness is frequently used to describe severe visual impairment with residual vision. Those described as having only light perception have no more sight than the ability to tell light from dark and the general direction of a light source.

In order to determine which people may need special assistance because of their visual disabilities, various governmental jurisdictions have formulated more complex definitions referred to as legal blindness. In North America and most of Europe, legal blindness is defined as visual acuity (vision) of 20/200 (6/60) or less in the better eye with best correction possible. This means that a legally blind individual would have to stand 20 feet (6.1 m) from an object to see it—with corrective lenses—with the same degree of clarity as a normally sighted person could from 200 feet (61 m). In many areas, people with average acuity who nonetheless have a visual field of less than 20 degrees (the norm being 180 degrees) are also classified as being legally blind. Approximately ten percent of those deemed legally blind, by any measure, have no vision. The rest have some vision, from light perception alone to relatively good acuity. Low vision is sometimes used to describe visual acuities from 20/70 to 20/200.