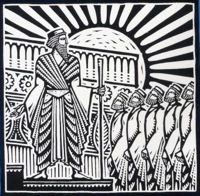 Malachi (Malachias), whose name signifies The Angel of the Lord, was contemporary with Nehemiah, and by some is believed to have been the same person as Ezra (Esdras). He was the last of the prophets, in the order of time, and flourished about four hundred years before Christ. He foretells the coming of Christ; the reprobation of the Jews and their sacrifices; and the calling of the Gentiles, who shall offer up to God in every place an acceptable sacrifice. (For more information, see the article MALACHIAS in the Catholic Encyclopedia.)[1]

[3] but I have hated Esau; I have laid waste his hill country and left his heritage to jackals of the desert." [4] If Edom says, "We are shattered but we will rebuild the ruins," the LORD of hosts says, "They may build, but I will tear down, till they are called the wicked country, the people with whom the LORD is angry for ever." [5] Your own eyes shall see this, and you shall say, "Great is the LORD, beyond the border of Israel!" [6]"A son honors his father, and a servant his master. If then I am a father, where is my honor? And if I am a master, where is my fear? says the LORD of hosts to you, O priests, who despise my name. You say, `How have we despised thy name?'

[2] If you will not listen, if you will not lay it to heart to give glory to my name, says the LORD of hosts, then I will send the curse upon you and I will curse your blessings; indeed I have already cursed them, because you do not lay it to heart. [3] Behold, I will rebuke your offspring, and spread dung upon your faces, the dung of your offerings, and I will put you out of my presence. [4] So shall you know that I have sent this command to you, that my covenant with Levi may hold, says the LORD of hosts. [5] My covenant with him was a covenant of life and peace, and I gave them to him, that he might fear; and he feared me, he stood in awe of my name. [6] True instruction was in his mouth, and no wrong was found on his lips. He walked with me in peace and uprightness, and he turned many from iniquity. [7] For the lips of a priest should guard knowledge, and men should seek instruction from his mouth, for he is the messenger of the LORD of hosts. [8] But you have turned aside from the way; you have caused many to stumble by your instruction; you have corrupted the covenant of Levi, says the LORD of hosts, [9] and so I make you despised and abased before all the people, inasmuch as you have not kept my ways but have shown partiality in your instruction." [10]Have we not all one father? Has not one God created us? Why then are we faithless to one another, profaning the covenant of our fathers?

[11] Judah has been faithless, and abomination has been committed in Israel and in Jerusalem; for Judah has profaned the sanctuary of the LORD, which he loves, and has married the daughter of a foreign god. [12] May the LORD cut off from the tents of Jacob, for the man who does this, any to witness or answer, or to bring an offering to the LORD of hosts! [13] And this again you do. You cover the LORD's altar with tears, with weeping and groaning because he no longer regards the offering or accepts it with favor at your hand.

[14] You ask, "Why does he not?" Because the LORD was witness to the covenant between you and the wife of your youth, to whom you have been faithless, though she is your companion and your wife by covenant. [15] Has not the one God made and sustained for us the spirit of life? And what does he desire? Godly offspring. So take heed to yourselves, and let none be faithless to the wife of his youth. [16] "For I hate divorce, says the LORD the God of Israel, and covering one's garment with violence, says the LORD of hosts. So take heed to yourselves and do not be faithless." [17] You have wearied the LORD with your words. Yet you say, "How have we wearied him?" By saying, "Every one who does evil is good in the sight of the LORD, and he delights in them." Or by asking, "Where is the God of justice?"

[1] "Behold, I send my messenger to prepare the way before me, and the Lord whom you seek will suddenly come to his temple; the messenger of the covenant in whom you delight, behold, he is coming, says the LORD of hosts.

[2] But who can endure the day of his coming, and who can stand when he appears?

[3] he will sit as a refiner and purifier of silver, and he will purify the sons of Levi and refine them like gold and silver, till they present right offerings to the LORD. [4] Then the offering of Judah and Jerusalem will be pleasing to the LORD as in the days of old and as in former years. [5]"Then I will draw near to you for judgment; I will be a swift witness against the sorcerers, against the adulterers, against those who swear falsely, against those who oppress the hireling in his wages, the widow and the orphan, against those who thrust aside the sojourner, and do not fear me, says the LORD of hosts.

[6]"For I the LORD do not change; therefore you, O sons of Jacob, are not consumed.

[14] You have said, `It is vain to serve God. What is the good of our keeping his charge or of walking as in mourning before the LORD of hosts? [15] Henceforth we deem the arrogant blessed; evildoers not only prosper but when they put God to the test they escape.'" [16]Then those who feared the LORD spoke with one another; the LORD heeded and heard them, and a book of remembrance was written before him of those who feared the LORD and thought on his name.

[17] "They shall be mine, says the LORD of hosts, my special possession on the day when I act, and I will spare them as a man spares his son who serves him. [18] Then once more you shall distinguish between the righteous and the wicked, between one who serves God and one who does not serve him.

[1] "For behold, the day comes, burning like an oven, when all the arrogant and all evildoers will be stubble; the day that comes shall burn them up, says the LORD of hosts, so that it will leave them neither root nor branch.

[2] But for you who fear my name the sun of righteousness shall rise, with healing in its wings. You shall go forth leaping like calves from the stall. [3] And you shall tread down the wicked, for they will be ashes under the soles of your feet, on the day when I act, says the LORD of hosts. [4] "Remember the law of my servant Moses, the statutes and ordinances that I commanded him at Horeb for all Israel.

[5] "Behold, I will send you Eli'jah the prophet before the great and terrible day of the LORD comes.