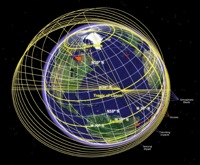 Catastrophism is the idea that Earth has been affected in the past by sudden, short-lived, violent events, possibly worldwide in scope.

The dominant paradigm of modern geology, in contrast, is uniformitarianism (also sometimes described as gradualism), in which slow incremental changes, such as erosion, create the Earth's appearance. This view holds that the present is the key to the past, and that all things continue as they were from the beginning of the world. Recently a more inclusive and integrated view of geologic events has developed, changing the scientific consensus to accept some catastrophic events in the geologic past.

For lessons on the topic of Catastrophism, follow this link.

Until the 19th century the dominant scientific beliefs in Europe were founded on the biblical narratives of Creation and the universal deluge. Other ancient deluge myths have been discovered since then, explaining why the flood story was "stated in scientific methods with surprising frequency among the Greeks", an example being Plutarch's account of the Ogygian flood.[1] Earth's history was viewed as the result of an accumulation of catastrophic events over a relatively short time period, before the depth of geological time was appreciated. In this way they were able to explain the observations of early geologists within the framework of a short Earth history.

Cuvier and the natural theologians

The leading scientific proponent of catastrophism in the early nineteenth century was the French anatomist and paleontologist Georges Cuvier. His motivation was to explain the patterns of extinction and faunal succession that he and others were observing in the fossil record. While he did speculate that the catastrophe responsible for the most recent extinctions in Eurasia might have been the result of the inundation of low lying areas by the sea, he never made any reference to Noah's flood.[2] Nor did he ever make any reference to divine creation as the mechanism by which repopulation occurred following the extinction event. In fact Cuvier, influenced by the ideas of the Enlightenment and the intellectual climate of the French revolution, avoided religious or metaphysical speculation in his scientific writings.[3] Cuvier also believed that the stratigraphic record indicated that there had been several of these revolutions, which he viewed as recurring natural events, amid long intervals of stability during the history of life on earth. This led him to believe the Earth was several million years old.[4]

By contrast in England, where natural theology was very influential during the early nineteenth century, a group of geologists that included William Buckland and Robert Jameson would interpret Cuvier's work in a very different way. Jameson translated the introduction Cuvier wrote for a collection of his papers on fossil quadrapeds that discussed his ideas on castastrophic extinction into English and published it under the title Theory of the Earth. He added extensive editorial notes to the translation that explicitly linked the latest of Cuvier's revolutions with the biblical flood, and the resulting essay was extremely influential in the English speaking world.[5]

Buckland spent much of his early career trying to demonstrate the reality of the biblical flood with geological evidence. He frequently cited Cuvier's work even though Cuvier had proposed an inundation of limited geographic extent and extended duration, and Buckland, to be consistent with the biblical account, was advocating a universal flood of short duration.[6] Eventually, Buckland would abandon flood geology in favor of the glaciation theory advocated by Louis Agassiz who had briefly been one of Cuvier's students. As a result of the influence of Jameson, Buckland, and other advocates of natural theology, the nineteenth century debate over catastrophism took on religious overtones in Britain that were not nearly as prominent elsewhere.[7]

An alternative paradigm to the traditional view of catastrophism was first proposed in the eleventh century by the Persian geologist, Avicenna (Ibn Sina, 980-1037), who provided the first uniformatarian explanations for geological processes in The Book of Healing. He recognized that mountains were formed after a long sequence of events that predate human existence.[8][9] While discussing the formation of mountains, he explained:

"Either they are the effects of upheavals of the crust of the earth, such as might occur during a violent earthquake, or they are the effect of water, which, cutting itself a new route, has denuded the valleys, the strata being of different kinds, some soft, some hard... It would require a long period of time for all such changes to be accomplished, during which the mountains themselves might be somewhat diminished in size."[9]

After The Book of Healing was translated into Latin in the twelfth century, a few other scientists also reasoned in uniformitarian terms, but the theory was not proven until the late eighteenth century.[8] The uniformitarian explanations for the formation of sedimentary rock and an understanding of the immense stretch of geological time or 'Deep time' were proven by the eighteenth century 'father of geology' James Hutton and the nineteenth century geologist Charles Lyell.

"At the beginning of the nineteenth century, the French geologist and naturalist Baron Georges Cuvier proposed what came to be known as the Catastrophe theory or Catastrophism. According to the theory, the abrupt faunal changes geologists saw in rock strata were the result of periodic devastations that wiped out all or most extant species, each successive period being repopulated with new kinds of animals and plants, by God's hand. [Charles] Lyell rejected so non-scientific[ a hypothesis (as did James Hutton before him), and replaced it with the notion that geological processes proceeded gradually - all geological processes." (Lewin, 1993)

The rise of uniformitarianism

From around 1850 to 1980, most geologists endorsed uniformitarianism ("The present is the key to the past") and gradualism (geologic change occurs slowly over long periods of time) and rejected the idea that cataclysmic events such as earthquakes, volcanic eruptions, or floods of vastly greater power than those observed at the present time, played any significant role in the formation of the Earth's surface. Instead they believed that the earth had been shaped by the long term action of forces such as volcanism, earthquakes, erosion, and sedimentation, that could still be observed in action today. In part, the geologists' rejection was fostered by their impression that the catastrophists of the nineteenth century believed that God was directly involved in determining the history of Earth. Catastrophism of the nineteenth and early twentieth centuries was closely tied to religion and catastrophic origins were considered miraculous rather than natural events.[11]

In the 1950s, Immanuel Velikovsky propounded catastrophism in several popular books. He speculated that the planet Venus is a former "comet" which was ejected from Jupiter and subsequently 3,500 years ago made two catastrophic close passes by Earth, 52 years apart, and later interacted with Mars, which then had a series of near collisions with Earth which ended in 687 B.C.E., before settling into its current orbit. Velikovsky used this to explain the biblical plagues of Egypt, the biblical reference to the "Sun standing still" for a day (explained by changes in Earth's rotation), and the sinking of Atlantis. In general, scientists rejected Velikovsky's theories, often quite passionately.[12] Attempts were made to prevent the publication of his books by pressuring his first publisher, Macmillan, which only increased the books popularity.[13] Not all scientists shared this viewpoint, and his supporters point out that Albert Einstein remained a close friend of Velikovsky's until his death.[13] However, Einstein made it clear in their correspondence that although he had come to accept the fact of global catastrophism, he did not accept his friend's ideas regarding Venus as one of its causes.[14][15] ===Catastrophism today

Neocatastrophism is the explanation of sudden extinctions in the palaeontological record by high magnitude, low frequency events, as opposed to the more prevalent geomorphological thought which emphasises low magnitude, high frequency events.[16] [edit]Luis Alvarez impact event hypothesis Main article: Impact event Over the past 25 years, however, a scientifically based catastrophism has gained wide acceptance with regard to certain events in the distant past. One impetus for this change came from the publication of a historic paper by Walter and Luis Alvarez in 1980. This paper suggested that a 10 kilometres (6.2 mi) asteroid struck Earth 65 million years ago at the end of the Cretaceous period. The impact wiped out about 70% of all species, including the dinosaurs, leaving behind the so-called K-T boundary. In 1990, a 180 kilometres (110 mi) candidate crater marking the impact was identified at Chicxulub in the Yucatán Peninsula of Mexico. Since then, the debate about the extinction of the dinosaurs and other mass extinction events has centered on whether the extinction mechanism was the asteroid impact, widespread volcanism (which occurred about the same time), or some other mechanism or combination. Most of the mechanisms suggested are catastrophic in nature. The observation of the Shoemaker-Levy 9 cometary collision with Jupiter illustrated that catastrophic events occur as natural events. [edit]Catastrophism theory and Moon-formation Main article: Giant impact theory Modern theories also suggest that Earth's anomalously large moon was formed catastrophically. In a paper published in Icarus in 1975, Dr. William K. Hartmann and Dr. Donald R. Davis proposed that a stochastic catastrophic near-miss by a large planetesimal early in Earth's formation approximately 4.5 billion years ago blew out rocky debris, remelted Earth and formed the Moon, thus explaining the Moon's lesser density and lack of an iron core.[17]

Today most geologists combine catastrophist and uniformitarianist standpoints, taking the view that Earth's history is a slow, gradual story punctuated by occasional natural catastrophic events that have affected Earth and its inhabitants.[18]