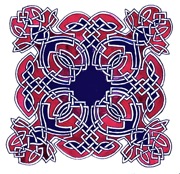 Celts (ˈkelts), see names of the Celts; the most common academic usage is with a hard "c", pronounced as "k"), is a modern term used to describe any of the European peoples who spoke, or speak, a Celtic language. (Celtic Culture : A Historical Encyclopedia ISBN 978-1851094400) The term is also used in a wider sense to describe the modern descendants of those peoples, notably those who participate in a Celtic culture.

The historical Celts were a diverse group of tribal societies in Iron Age Europe. Proto-Celtic culture formed in the Early Iron Age in Central Europe's Hallstatt period, named for the site in present-day Austria). By the later Iron Age (La Tène]] period), Celts had expanded over a wide range of lands: as far west as Ireland and the Iberian Peninsula, as far east as Galatia (central Anatolia), and as far north as Scotland.

By the early first milennium AD, following the expansion of the Roman Empire and the Great Migrations (Migration Period) of Germanic peoples, Celtic culture had become restricted to the British Isles (Insular Celtic), and the Continental Celtic languages ceased to be widely used by the sixth century. "Celtic Europe" today refers to the lands surrounding the Irish Sea, as well as Cornwall and Brittany on either side of the English Channel.[1]