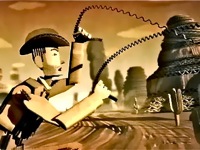 [Middle English. calenge, chalange, a. Old French, ca-, chalenge, -lange, orig. -longe (with many other forms) = Pr. calonja, Old Spanish. caloña:{em}L. calumnia, trickery, artifice, misrepresentation, false accusation, malicious action at law; prob. f. calvi, calvere to devise tricks. With the phonetic development in Old French. cf. that of somnium, songe. Old English. had both the Northern French. calenge, and the central F. chalenge; the latter has (as in many other words) survived. Challenge is thus originally the same word as calumny. Some of the senses still in use go back to the Middle English. and Old French. n., but others are taken immediately from the vb., as in blame, etc., so that the sequence is not simple.]

For lessons on the topic of Challenge, follow this link.

b. Hunting. The opening and crying of hounds at finding the scent

b. In weakened use: a difficult or demanding task, esp. one seen as a test of one's abilities or character. 20th century