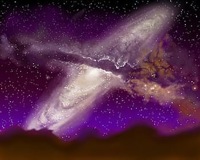 A collision is an isolated event in which two or more moving bodies (colliding bodies) exert relatively strong forces on each other for a relatively short time.

The magnitude of the velocity difference at impact is called the closing speed.

The field of dynamics is concerned with moving and colliding objects.

Let the linear, angular and internal momenta of a molecule be given by the set of r variables { pi }. The state of a molecule may then be described by the range δwi = δp1δp2δp3 ... δpr. There are many such ranges corresponding to different states; a specific state may be denoted by the index i. Two molecules undergoing a collision can thus be denoted by (i, j) (Such an ordered pair is sometimes known as a constellation.)

This notation is convenient in proving Boltzmann's H-theorem of statistical mechanics.[1]