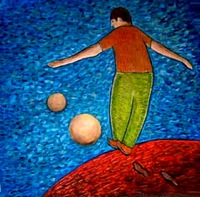 A commentary is a line-by-line or even word-by-word explication usually attached to an edition of a text in the same or an accompanying volume. It may draw on methodologies of close reading and literary criticism, but its primary purpose is to elucidate the language of the text and the specific culture that produced it, both of which may be foreign to the reader. Such a commentary usually takes the form of footnotes, endnotes, or separate text cross-referenced by line, paragraph or page.

Means of providing commentary on the language of the text include notes on textual criticism, syntax and semantics, and the analysis of rhetoric, literary tropes, and style. The aim is to remove, lessen or point out linguistic obstacles to reading and understanding the text.

If a text is historical, or is produced within a culture assumed to be of limited familiarity to a reader, a broader range of issues may require elucidation. These include, but are by no means limited to, biographical data pertaining to the author, historical events, customs and laws, technical terminology and facts of daily life, religious beliefs and philosophical perspectives, literary allusions, geographical settings, and cross-references to related passages in the same work, other works by the author, or sources used by the author.[1]

Some commentaries from Classical Antiquity or the Middle Ages (more strictly referred to as scholia) are a valuable source of information otherwise unknown, including references to works that are now lost. Jerome provides a list of several commentaries that were in use during his days as a student in the 350s A.D.[2] One of the most used of the ancient scholia today is that of Servius on Vergil’s Aeneid, written in the 4th century.

The production of commentaries began to flourish in the 16th century as part of the humanist project to recover the texts of antiquity, with its related boom in publishing. In the modern era, a commentary differs from an annotated edition aimed at students or the casual reader in that it attempts to address an exhaustive range of scholarly questions, many of which may be of concern or interest primarily to specialists. The commentator may take a position on variant readings of the text or on a point of scholarly dispute, but arguments are usually succinct, a paragraph or less than a page in length.