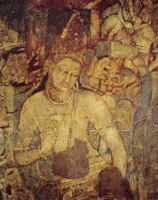 Compassion is a human emotion prompted by the pain of others. More vigorous than empathy, the feeling commonly gives rise to an active desire to alleviate another's suffering. It is often, though not inevitably, the key component in what manifests in the social context as altruism. In ethical terms, the various expressions down the ages of the Golden Rule embody by implication the principle of compassion: Do to others what you would have them do to you. [1] Cited as a great virtue in numerous philosophies, compassion is considered in all the major religious traditions as among the greatest of virtues.

For lessons on the topic of Compassion, follow this link.

Religious and spiritual views on compassion

In the various Hindu traditions, compassion is called DAYA, and, along with charity and self-control, is one of the three central virtues.[2]

The importance of compassion in the Hindu traditions reaches as far back as the Vedas, sacred texts composed over a period prior to 1500 B.C. While the early Vedas sometimes glorify war and the worship of the war god, Indra, the later Vedas demonstrate a greater sensitivity to the values of compassion. The central concept particularly relevant to compassion in Hindu spirituality is that of ahimsa. The exact definition of ahimsa varies from one tradition to another. Ahimsa is a Sanskrit word which can be translated most directly as "refraining from harmfulness." It is a derivation of himsa which means harmful, or having the intent to cause harm. [3]

The first of what in English are called the Four Noble Truths is the truth of suffering or dukkha (unsatisfactoriness or stress). Stress is identified as one of the three distinguishing characteristics of all conditioned existence. It arises as a consequence of the failure to adapt to change or anicca (the second characteristic) and the insubstantiality, lack of fixed identity, the horrendous lack of certainty or anatta (the third characteristic) to which all this constant change in turn gives rise. Compassion made possible by observation and accurate perception is the appropriate practical response. The ultimate and earnest wish, manifest in the Buddha, both as archetype and as historical entity, is to relieve the suffering of all living beings everywhere. [5]

The Dalai Lama has said, "If you want others to be happy,  practice compassion.  If you want to be happy,  practice compassion." The noted American monk Bhikkhu Bodhi states that compassion "supplies the complement to loving-kindness: whereas loving-kindness has the characteristic of wishing for the happiness and welfare of others, compassion has the characteristic of wishing that others be free from suffering, a wish to be extended without limits to all living beings. Like metta, compassion arises by entering into the subjectivity of others, by sharing their interiority in a deep and total way. It springs up by considering that all beings, like ourselves, wish to be free from suffering, yet despite their wishes continue to be harassed by pain, fear, sorrow, and other forms of dukkha."[6]

At the same time, it is emphasised that in order to manifest effective compassion for others it is first of all necessary to be able to experience and fully appreciate one's own suffering and to have, as a consequence, compassion for oneself. The Buddha is reported to have said, "It is possible to travel the whole world in search of one who is more worthy of compassion than oneself. No such person can be found."

Compassion for all life, human and non-human, is central to the Jain tradition. Though all life is considered sacred, human life is deemed the highest form of earthly existence. To kill any person, no matter their crime, is considered unimaginably abhorrent. It is the only substantial religious tradition that requires both monks and laity to be vegetarian. It is suggested that certain strains of the Hindu tradition became vegetarian due to strong Jain influences.[7] The Jain tradition's stance on nonviolence, however, goes far beyond vegetarianism. Jains refuse food obtained with unnecessary cruelty. Many practice a lifestyle similar to veganism in response to factory farming. Jains run animal shelters all over India: Delhi has a bird hospital run by Jains; every city and town in Bundelkhand has animal shelters run by Jains. Jain monks go to inordinate lengths to avoid killing any living creature, sweeping the ground in front of them in order to avoid killing insects, and even wearing a face mask to avoid inhaling the smallest fly.

In the Jewish tradition, God is the Compassionate and is invoked as the Father of Compassion[8]: hence Raḥmana or Compassionate becomes the usual designation for His revealed word. (Compare, below, the frequent use of raḥman in the Quran).[9]Sorrow and pity for one in distress, creating a desire to relieve, is a feeling ascribed alike to man and God: in Biblical Hebrew, ("riḥam," from "reḥem," the mother, womb), "to pity" or "to show mercy" in view of the sufferer's helplessness, hence also "to forgive" (Hab. iii. 2); , "to forbear" (Ex. ii. 6; I Sam. xv. 3; Jer. xv. 15, xxi. 7.) The Rabbis speak of the "thirteen attributes of compassion." The Biblical conception of compassion is the feeling of the parent for the child. Hence the prophet's appeal in confirmation of his trust in God invokes the feeling of a mother for her offspring (Isa. xlix. 15). [9] Lack of compassion, by contrast, marks a people as cruel (Jer. vi. 23). The repeated injunctions of the Law and the Prophets that the widow, the orphan and the stranger should be protected show how deeply, it is argued, the feeling of compassion was rooted in the hearts of the righteous in ancient Israel.[10]

Compassion, empathy, altruism, kindness and love are frequently used interchangeably in common usage. When the concept is examined in depth it becomes clear that compassion is more than simply a human emotion. Kabbalah, the Jewish mystical tradition, is particularly clear about this. One rabbi has put it this way:

“Kindness gives to another. Compassion knows no 'other'. ”

[11] This idea is greatly expanded by Michael Laitman who says, "Thus if we thoroughly examine Nature's elements, we will see that altruism is the basis of life." Here altruism is the word used but the concept is consistent with an understanding of compassion [12]

A classic articulation of the Golden Rule (see above) came from the first century Rabbi Hillel the Elder. Renowned in the Jewish tradition as a sage and a scholar, he is associated with the development of the Mishnah and the Talmud and, as such, one of the most important figures in Jewish history. Asked for a summary of the Jewish religion in the most concise terms, Hillel replied (reputedly while standing on one leg): "That which is hateful to you, do not do to your fellow. That is the whole Torah. The rest is the explanation; go and learn." [13] Post 9/11, the words of Rabbi Hillel are frequently quoted in public lectures and interviews around the world by the prominent writer on comparative religion Karen Armstrong.

The Christian Bible's Second Epistle to the Corinthians is but one place where God is spoken of as the "Father of compassion" and the "God of all comfort" (1.3). The life of Jesus embodies for Christians the very essence of compassion. Christ's example challenges Christians to forsake their own desires and to act compassionately towards others, particularly those in need or distress.[14] Jesus assures his listeners in the Sermon on the Mount that, "Blessed are the merciful, for they shall obtain mercy." In the Parable of the Good Samaritan he holds up to his followers the ideal of compassionate conduct.

The heritage within Western Christendom of compassion as the principle of charity has resulted in recent times in the growth of remarkable charitable phenomena such as Oxfam, Médecins sans Frontières and Live Aid with global reach and budgets of millions of dollars. True Christian compassion, say the Gospels, should extend to all, even to the extent of loving one's enemies.

In the Muslim tradition, foremost among God's attributes are mercy and compassion or, in the canonical language of Arabic, Rahman and Rahim. Each of the 114 chapters of the Qu'ran, with one exception, begins with the verse, "In the name of God the Merciful, the Compassionate". [15] The Arabic word for compassion is rahmah. As a cultural influence, its roots abound in the Quran. A good Muslim is to commence each day, each prayer and each significant action by invoking God the Merciful and Compassionate, i.e. by reciting Bism-i-llah a-Rahman-i-Rahim.

The Muslim scriptures urge compassion towards captives as well as to widows, orphans and the poor. Traditionally, Zakat, a toll tax to help the poor and needy, was obligatory upon all Muslims (9:60). One of the practical purposes of fasting or sawm during the month of Ramadan is to help one empathize with the hunger pangs of those less fortunate, to enhance sensitivity to the suffering of others and develop compassion for the poor and destitute. [16] The Prophet is referred to by the Quran as the Mercy of the World (21:107); and one of the sayings of the Prophet informs the faithful that, "God is more loving and kinder than a mother to her dear child." [15]

b. with plural. Obs. or arch.
c. to have compassion: to have pity, take pity. So to take compassion (upon, of).