From Nordan Symposia
(Redirected from Computer)
Jump to navigationJump to search 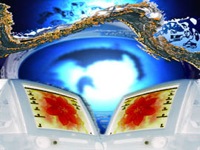 A computer is a programmable machine that receives input, stores and manipulates data, and provides output in a useful format.

Although mechanical examples of computers have existed through much of recorded human history, the first electronic computers were developed in the mid-20th century (1940–1945). These were the size of a large room, consuming as much power as several hundred modern personal computers (PCs). Modern computers based on integrated circuits are millions to billions of times more capable than the early machines, and occupy a fraction of the space. Simple computers are small enough to fit into small pocket devices, and can be powered by a small battery. Personal computers in their various forms are icons of the Information Age and are what most people think of as "computers". However, the embedded computers found in many devices from MP3 players to fighter aircraft and from toys to industrial robots are the most numerous.

The ability to store and execute lists of instructions called programs makes computers extremely versatile, distinguishing them from calculators. The Church–Turing thesis is a mathematical statement of this versatility: any computer with a certain minimum capability is, in principle, capable of performing the same tasks that any other computer can perform. Therefore computers ranging from a netbook to a supercomputer are all able to perform the same computational tasks, given enough time and storage capacity.

A general purpose computer has four main components: the arithmetic logic unit (ALU), the control unit, the memory, and the input and output devices (collectively termed I/O). These parts are interconnected by busses, often made of groups of wires.

The control unit, ALU, registers, and basic I/O (and often other hardware closely linked with these) are collectively known as a central processing unit (CPU). Early CPUs were composed of many separate components but since the mid-1970s CPUs have typically been constructed on a single integrated circuit called a microprocessor.

Networking and the Internet

Computers have been used to coordinate information between multiple locations since the 1950s. The U.S. military's SAGE system was the first large-scale example of such a system, which led to a number of special-purpose commercial systems like Sabre.

In the 1970s, computer engineers at research institutions throughout the United States began to link their computers together using telecommunications technology. This effort was funded by ARPA (now DARPA), and the computer network that it produced was called the ARPANET. The technologies that made the Arpanet possible spread and evolved.

In time, the network spread beyond academic and military institutions and became known as the Internet. The emergence of networking involved a redefinition of the nature and boundaries of the computer. Computer operating systems and applications were modified to include the ability to define and access the resources of other computers on the network, such as peripheral devices, stored information, and the like, as extensions of the resources of an individual computer. Initially these facilities were available primarily to people working in high-tech environments, but in the 1990s the spread of applications like e-mail and the World Wide Web, combined with the development of cheap, fast networking technologies like Ethernet and ADSL saw computer networking become almost ubiquitous. In fact, the number of computers that are networked is growing phenomenally. A very large proportion of personal computers regularly connect to the Internet to communicate and receive information. "Wireless" networking, often utilizing mobile phone networks, has meant networking is becoming increasingly ubiquitous even in mobile computing environments.