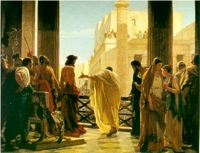 Middle English, from Anglo-French condempner, from Latin condemnare, from com- + damnare to condemn - see damn below

b : sentence, doom <condemn a prisoner to die>

Its Proto-Indo-European language origin is usually said to be a root dap-, which appears in Latin and Greek words meaning "feast" and "expense". (The connection is that feasts tend to be expensive.) In Latin this root provided a theorized early Latin noun *dapnom, which became Classical Latin damnum = "damage" or "expense". But there is a Vedic Sanskrit root dabh or dambh = "harm".

The word damnum did not have exclusively religious overtones. From it in English came "condemn"; "damnified" (an obsolete adjective meaning "damaged"); "damage" (via French from Latin damnaticum). It began to be used for being found guilty in a court of law; but, for example, an early French treaty called the Strasbourg Oaths includes the Latin phrase in damno sit = "would cause harm". From the judicial meaning came the religious meaning.