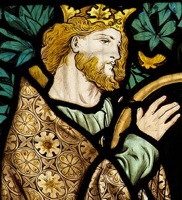 David Hebrew: דָּוִד, Modern David Tiberian dɔwið, "beloved"; Arabic: دَاوُۥدَ‎, Dāwud; Greek: Δαβιδ was the second king of the united Kingdom of Israel according to the Bible. He is depicted as a righteous king, although not without fault, as well as an acclaimed warrior, musician and poet, traditionally credited for composing many of the psalms contained in the Book of Psalms.

Thiele dates his life to c.1040–970 BC, his reign over Judah c.1010–1003 BC, and his reign over the united Kingdom of Israel c.1003–970 BC. The Books of Samuel[1] [2] are the only source of information on his life and reign, although the Tel Dan stele records the existence in the mid-9th century of a Judean royal dynasty called the "House of David".

David's life is particularly important to Jewish, Christian, and Islamic culture. In Islam, David (Dawood) is a prophet and the king of a nation, as well as the young warrior who slew Goliath before gaining power and ruling his kingdom. He is remembered for his eloquent speech and the beautiful recitation of God's word.[3]

David is regarded by both tradition and modern scholarship as the greatest ruler of the combined states of Israel and Judah. He was able to free them from the control of the Philistines and to gain a measure of domination over some of the neighboring states (Edom, Moab, Ammon) and some of the Aramean states of Syria. At the same time he established treaty relations with Tyre and Hamath. He also extended the territories of Judah and Israel to include a number of major Canaanite cities and took Jerusalem by conquest. It became his capital and remained the ruling center of Judah until the end of the monarchy.

There are no references to David in any historical source outside the Bible. One contemporary ruler, Hiram of Tyre, mentioned in 2 Samuel 5:11, is known from other historical sources, but the correlation of the chronologies of the two kings remains problematic.

The assessment of David's career is based upon sources in 1 Samuel 16 through 1 Kings 2. Some of these that mention his military activities reflect annalistic or formal documents. These are now embedded within two literary works often regarded as nearly contemporary with David and an important witness to the events: the story of David's rise to power ( 1 Sm. 16 through 2 Sm. 2:7, 2 Sm. 5), and the court history, or succession story (2 Sm. 2:8–4:12, 6:16, 6:20–23; 2 Sm. 9–20; 1 Kgs. 1–2). It remains less clear how 2 Samuel 6–8 relates to either of these works or how they all fit into the larger history of the monarchy. The materials in 2 Samuel 21–24 are supplemental additions that do not belong to the other sources.

There are, however, two serious questions about this literary analysis. First, the identification of a distinct literary work, the story of David's rise to power, may be doubted, since it may be viewed as a continuation of earlier materials in Samuel and as having strong ties to the rest of the so-called Deuteronomist's history of the monarchy—in which case it would be a work of the exilic period. Second, the court history was not originally part of this history but constitutes a later addition with quite a different perspective. If these two views can be sustained, then both works are comparatively late, and great caution must be exercised in using them as historical sources for the time of David.

Whatever their historical value might be, the literary works within 1 Samuel 16 through 1 Kings 2 establish David's place within the Israelite-Jewish tradition. Two quite different views of David's character and his significance for later Israel are given in these works.

David in the Psalms

David is directly mentioned in only a few psalms (78, 89, and 132), those that make reference to the dynastic promise, all of which are dependent upon Samuel and Kings. In the Hebrew scriptures the superscriptions, which are all late, and which modern scholarship considers secondary additions, attribute seventy-three psalms to David. This continues the tradition of David's association with the sacred music of the Temple. But in a number of instances the individual laments (e.g., Ps. 51) are associated with particular events in David's life. Thus the psalms that were originally anonymous become increasingly associated with the figure of David.

While the royal ideology had at most a minor place in preexilic prophecy, it was only in late prophecy and in exilic and postexilic editing of prophetic books that the dynastic promise to David plays a major role in visions of the future. Hope is expressed for the restoration of the Davidic dynasty and times of prosperity. In their most elaborate form these prophecies predict an "anointed one" (the Messiah) who would manifest all the idealized attributes of royalty, liberate Israel from its enemies, and bring in the reign of Yahveh.[4]