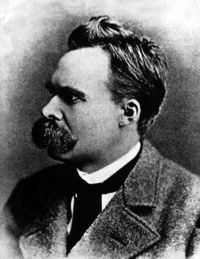 "God is dead" also known as the death of God) is a widely-quoted and sometimes misconstrued statement by German philosopher Friedrich Nietzsche. It first appears in The Gay Science (Die fröhliche Wissenschaft), section 108 (New Struggles), in section 125 (The Madman), and for a third time in section 343 (The Meaning of our Cheerfulness). It is also found in Nietzsche's classic work Thus Spoke Zarathustra (Also sprach Zarathustra), which is most responsible for popularizing the phrase. The idea is stated by "The Madman" as follows:

"God is dead" is not meant literally, as in "God is now physically dead"; rather, it is Nietzsche's way of saying that the idea of God is no longer capable of acting as a source of any moral code or teleology. Nietzsche recognizes the crisis which the death of God represents for existing moral considerations, because "When one gives up the Christian faith, one pulls the right to Christian morality out from under one's feet. This morality is by no means self-evident... By breaking one main concept out of Christianity, the faith in God, one breaks the whole: nothing necessary remains in one's hands."[1] This is why in "The Madman", the madman addresses the atheists primarily — the problem is to retain any system of values in the absence of a divine order. (He also goes to the churches to point out the death of God is an oft-forgotten part of the Christian creed, that Holy Saturday comes between the cross and Easter, that the experience of God's absence is essential to Christian life.)

The death of God is a way of saying that humans are no longer able to believe in any such cosmic order since they themselves no longer recognize it. The death of God will lead, Nietzsche says, not only to the rejection of a belief of cosmic or physical order but also to a rejection of absolute values themselves — to the rejection of belief in an objective and universal moral law, binding upon all individuals. In this manner, the loss of an absolute basis for morality leads to nihilism. This nihilism is what Nietzsche worked to find a solution for by re-evaluating the foundations of human values. This meant, to Nietzsche, looking for foundations that went deeper than the Christian values beyond which he felt most Christians refuse to look.

Nietzsche believed that the majority of people did not recognize (or refused to acknowledge) this death out of the deepest-seated fear or angst. Therefore, when the death did begin to become widely acknowledged, people would despair and nihilism would become rampant, as well as the relativistic belief that human will is a law unto itself—anything goes and all is permitted. This is partly why Nietzsche saw Christianity as nihilistic. To Nietzsche, nihilism is the consequence of any idealistic philosophical system, because all idealisms suffer from the same weakness as Christian morality—that there is no "foundation" to build on. He therefore describes himself as "a 'subterranean man' at work, one who tunnels and mines and undermines."(trans. Hollingdale; Daybreak, Preface, sect. 1)

Nietzsche believed there could be positive possibilities for humans without God. Relinquishing the belief in God opens the way for human creative abilities to fully develop. The Christian God, he wrote, would no longer stand in the way, so human beings might stop turning their eyes toward a supernatural realm and begin to acknowledge the value of this world. The recognition that "God is dead" would be like a blank canvas. It is a freedom to become something new, different, creative — a freedom to be something without being forced to accept the baggage of the past.

Nietzsche uses the metaphor of an open sea, which can be both exhilarating and terrifying. The people who eventually learn to create their lives anew will represent a new stage in human existence, the Übermensch —i.e. the personal archetype who, through the conquest of their own nihilism, themselves become a mythical hero. The 'death of God' is the motivation for Nietzsche's last (uncompleted) philosophical project, the 'revaluation of all values'.

Although Nietzsche puts the statement "God is Dead" into the mouth of a "madman" in The Gay Science, he also uses the phrase in his own voice in sections 108 and 343 of the same book. In the madman's passage, the man is described as running through a marketplace shouting, "I seek God! I seek God!" He arouses some amusement; no one takes him seriously. Maybe he took an ocean voyage? Lost his way like a little child? Maybe he's afraid of us (non-believers) and is hiding?-- much laughter. Frustrated, the madman smashes his lantern on the ground, crying out that "God is dead, and we have killed him, you and I!" "But I have come too soon," he immediately realizes, as his detractors of a minute before stare in astonishment: people cannot yet see that they have killed God. He goes on to say:

Earlier in the book (section 108), Nietzsche wrote "God is Dead; but given the way of men, there may still be caves for thousands of years in which his shadow will be shown. And we — we still have to vanquish his shadow, too." The protagonist in Thus Spoke Zarathustra also speaks the words, commenting to himself after visiting a hermit who, every day, sings songs and lives to glorify his god:

What is more, Zarathustra later refers, not only to the death of God, but that 'Dead are all the Gods'. It is not just one morality that has died, but all of them, to be replaced by the life of the übermensch, the new man:

The cover of the April 8, 1966 edition of Time and the accompanying article concerned a movement in American theology that arose in the 1960s known as the "death of God". The death of God movement is sometimes technically referred to as "theothanatology" (In Greek, Theos means God and Thanatos means death.)

In 1961, Vahanian's book The Death of God was published. Vahanian argued that modern secular culture had lost all sense of the sacred, lacking any sacramental meaning, no transcendental purpose or sense of providence. He concluded that for the modern mind "God is dead", but he did not mean that God did not exist. In Vahanian's vision a transformed post-Christian and post-modern culture was needed to create a renewed experience of deity.

Both Van Buren and Hamilton agreed that the concept of transcendence had lost any meaningful place in modern thought. According to the norms of contemporary modern thought, God is dead. In responding to this collapse in transcendence Van Buren and Hamilton offered secular people the option of Jesus as the model human who acted in love. The encounter with the Christ of faith would be open in a church-community.

Altizer offered a radical theology of the death of God that drew upon William Blake, Hegelian thought and Nietzschean ideas. He conceived of theology as a form of poetry in which the immanence (presence) of God could be encountered in faith communities. However, he no longer accepted the possibility of affirming belief in a transcendent God. Altizer concluded that God had incarnated in Christ and imparted his immanent spirit which remained in the world even though Jesus was dead (contrary to New Testament writings like 1 Peter 1:2).

Unlike Nietzsche, Altizer believed that God truly died. He is considered to be the leading exponent of the Death of God movement.

Rubenstein represented that radical edge of Jewish thought working through the impact of the Holocaust. In a technical sense he maintained, based on the Kabbalah, that God had "died" in creating the world. However, for modern Jewish culture he argued that the death of God occurred in Auschwitz. Although the literal death of God did not occur at this point, this was the moment in time in which humanity was awakened to the idea that a theistic God does not exist. In Rubenstein's work, it was no longer possible to believe in an orthodox/traditional theistic God of the Abrahamic covenant; rather God is an historical process. (See Richard L. Rubenstein. "God After the Death of God" in After Auschwitz: History, Theology, and Contemporary Judaism. 2nd. ed (Baltimore: John Hopkins University Press, 1992), 293-306.