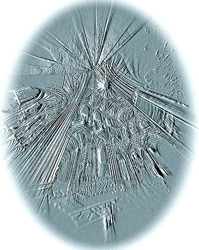 In English, derivative primarily refers to anything derived from a source - not primitive or original.

In copyright law, a derivative work is an artistic creation that includes major, basic copyrighted aspects of an original, previously created first work.

In the United States, "derivative work" is defined in A “derivative work” is a work based upon one or more preexisting works, such as a translation, musical arrangement, dramatization, fictionalization, motion picture version, sound recording, art reproduction, abridgment, condensation, or any other form in which a work may be recast, transformed, or adapted. A work consisting of editorial revisions, annotations, elaborations, or other modifications which, as a whole, represent an original work of authorship, is a “derivative work”.

To be copyrightable, a derivative work must be different enough from the original to be regarded as a "new work" or must contain a substantial amount of new material. Making minor changes or additions of little substance to a preexisting work will not qualify the work as a new version for copyright purposes. The new material must be original and copyrightable in itself. Titles, short phrases, and format, for example, are not copyrightable.

WHO MAY PREPARE A DERIVATIVE WORK? Only the owner of copyright in a work has the right to prepare, or to authorize someone else to create, a new version of that work. The owner is generally the author or someone who has obtained rights from the author.

From another informative Artslaw Org website: The copyright provides the owner with a number of exclusive rights, including the right to make new versions of the original work, called derivative works. This concept also protects an artist from having his/her original work reproduced in a different media by another artist, without the consent of the first artist[1].

Stanford Law School Center Chilling Effects discusses 'Derivative Works'. If you are an author or an artist and you want to use all or part of someone else's creation in your work, you may run into problems with claims that your art is a derivative work[2].

On its FAQ page: Question: Can I take a character from a movie, like Chewbacca from Star Wars, and use it in a play with a very different plot and otherwise different characters? Answer: Probably not. The people who hold copyright in Star Wars own the characters as well as the plot, the filmed images, etc. Placing a distinctive fictional character in a different context or medium is still copying that character, and therefore infringement[3].

From Hudis Sullivan Copyright Article on 'derivative work': Although a derivative work author usually has been authorized, through license, to incorporate the previous work into his derivation, he does not gain thereby a copyright in any preexisting material.

Since many films are based on novels or scripts they are classed as derivative works. In cases where the film's copyright has lapsed but the original work is still covered, the film cannot be freely distributed without the permission of the original author on whose work the film was based.Cite error: Closing </ref> missing for <ref> tag

This is a particular problem for software that utilizes licenses such as the GPL because these licenses put special restrictions on such derivations (for instance the so-called viral clause of strong copyleft licenses asks for the new work to not further restrict the freedoms granted sofar).

Because the legal situation is not entirely certain, the following should thus only be taken as rules of thumb:

A more detailed account on the issue can be found at Derivative Works by Lawrence Rosen.