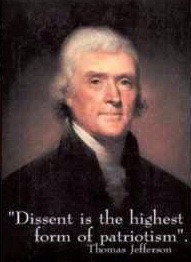 Dissent is a sentiment or philosophy of non-agreement or opposition to a prevailing idea (eg. a government's policies) or an entity (eg. an individual or political party which supports such policies). The term's antonyms include agreement, consensus (when all or nearly all parties agree on something) and consent (when one party agrees to a proposition made by another).

In some political systems, dissent may be formally expressed by way of opposition politics, while politically repressive regimes may prohibit any form of dissent, leading to suppression of dissent and the encouragement of social or political activism. Individuals who do not conform or support the policies of certain states may be described as "dissidents," or in extreme cases, "enemies of the state". Several thinkers have argued that a healthy society needs not only to protect, but also to encourage dissent.[1][2]

In a well known letter to Arnold Ruge, Karl Marx wrote: "if constructing the future and settling everything for all times are not our affair, it is all the more clear what we have to accomplish at present: I am referring to ruthless criticism of all that exists, ruthless both in the sense of not being afraid of the results it arrives at and in the sense of being just as little afraid of conflict with the powers that be."[3]