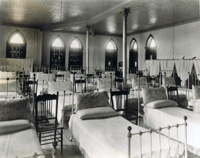 A dormitory (often shortened to dorm) in the United States is a residence hall consisting of sleeping quarters or entire buildings primarily providing sleeping and residential quarters for large numbers of people, often boarding school, college or university students. In the UK, the word has an earlier, different but related meaning: it refers specifically to an individual room in which many people sleep, typically at a boarding school. The UK equivalent of the American word as applied to university buildings is hall of residence, often shortened to halls.

The terms "residence hall" and "dorm" are often used interchangeably in the US. However, within the residence life community, the term "residence hall" is preferred. According to the University of Oregon, their facilities "provide not just a place to sleep, but also opportunities for personal and educational growth. Highly trained Residence Life staff and Hall Government officers support this objective by creating engaging activities and programs in each hall or complex."

In the U.S., UK and Canada, a dormitory has a different meaning, and is used for a room with more than one bed. Examples are found in British boarding schools and many rooming houses such as hostels but have nowadays completely vanished as a type of accommodation in university halls of residence. CADs, or Cold-Air Dormitories, are found in multi-level rooming houses such as fraternities, sororities, and cooperative houses. In CADs and in hostels, the room typically has very few furnishings except for beds. Such rooms can contain anywhere from three to 50 beds (though such very large dormitories are rare except perhaps as military barracks). Such rooms provide little or no privacy for the residents, and very limited storage for personal items in or near the beds.[1]