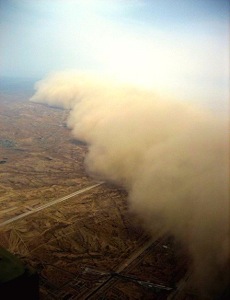 b : a state of humiliation

b : the surface of the ground

Dust consists of particles in the atmosphere that come from various sources such as soil dust lifted by weather (an Aeolian process), volcanic eruptions, and pollution. Dust in homes, offices, and other human environments contains small amounts of plant pollen, human and animal hairs, textile fibers, paper fibers, minerals from outdoor soil, human skin cells, burnt meteorite particles and many other materials which may be found in the local environment.

Cosmic dust is widely present in space, where gas and dust clouds are primary precursors for planetary systems. The zodiacal light, as seen in a dark night sky, is produced by sunlight reflected from particles of dust in orbit around the Sun. The tails of comets are produced by emissions of dust and ionized gas from the body of the comet. Dust also covers solid planetary bodies, and vast dust storms occur on Mars that cover almost the entire planet. Interstellar dust is found between the stars, and high concentrations produce diffuse nebulae and reflection nebulae.

Dust is widely present in the galaxy. Ambient radiation heats dust and re-emits radiation into the microwave band, which may distort the cosmic microwave background power spectrum. Dust in this regime has a complicated emission spectrum, and includes both thermal dust emission and spinning dust emission.

Dust samples returned from outer space may provide information about conditions in the early solar system. Several spacecraft have sought to gather samples of dust and other materials. Among these craft was Stardust, which flew past Comet Wild 2 in 2004, and returned a capsule of the comet's remains to Earth in January 2006. In 2010 the Japanese Hayabusa spacecraft returned samples of dust from the surface of an asteroid.[1]