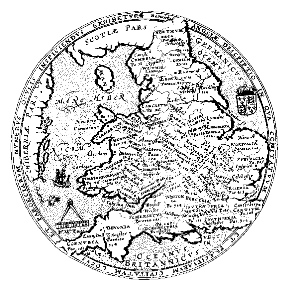 The origin of English is customarily linked to the date 449 C.E. This is the year in which the Anglo-Saxon Chronicle (Laud MS version) records the issuing of an invitation by Vortigern (king of the British, or Celts) to the "Angle kin" (Angles, led by Hengest and Horsa) to help them in their defense against the Picts. In return for their military assistance, the Chronicle says the Angles were granted lands in the southeast. Further aid was sought, and in response "came men of three peoples of Germanie": "of Ald Seaxum of Anglum of Iotum" (Saxons, Angles, and Jutes). These "immigrants" were, as the Chronicle tells us, Germanic, and the roots of English are in the Germanic family of languages. Germanic, in turn, is a branch of the Indo-European family of languages. Subsequent to the establishment of English in "Englalond" (i.e., the land of the Angles), the most profound outside influences on the development of PDE (present day english) are the Viking conquests and settlements--resulting in the establishment of the Danelaw--and the Norman Conquest. These events resulted in the assimiliation of Old Norse and French vocabulary and other linguistic features.

Chronology of Events in the History of English

Celtic peoples, most of whom are Christianized, are pushed increasingly (despite occasional violent uprisings) into the marginal areas of Britain: Ireland, Scotland, Wales. Anglo-Saxons, originally sea-farers, settle down as farmers, exploiting rich English farmland.

Under Alfred's terms of victory, England is partitioned into a part governed by the Anglo-Saxons (under the house of Wessex) and a part governed by the Scandinavians (some of whom become underlords of Alfred), divided by Watling Street. 15 years of peace follow; Alfred reigns over peaceful and prosperous kingdom. First called "Alfred the Great".

After Cnut's death his sons bicker over the kingdom. When they die without issue, the kingdom passes back to the house of Wessex, to young Edward, son of Aethelred and Emma, who had been raised in exile in Normandy. Edward is a pious, monkish man called "The Confessor".

William of Normandy claims that Harold once promised to support HIM as successor to Edward. Harold denies it. William prepares to mount an invasion. Ready by summer, but the winds are unfavorable for sailing.

The winds change, and William puts to sea. Harold rushes back down to the south coast to try to repel William's attack. Mercians and Northumbrians are supposed to march down to help him, but never do. They don't realize what's in store for them.

1066-1075 William crushes uprisings of Anglo-Saxon earls and peasants with a brutal hand; in Mercia and Northumberland, uses (literal) scorched earth policy, decimating population and laying waste the countryside. Anglo-Saxon earls and freemen deprived of property; many enslaved. William distributes property and titles to Normans (and some English) who supported him. Many of the English hereditary titles of nobility date from this period.

English becomes the language of the lower classes (peasants and slaves). Norman French becomes the language of the court and propertied classes. The legal system is redrawn along Norman lines and conducted in French. Churches, monasteries gradually filled with French-speaking functionaries, who use French for record-keeping. After a while, the Anglo-Saxon Chronicle is no longer kept up. Authors write literature in French, not English. For all practical purposes English is no longer a written language.

Bilingualism gradually becomes more common, especially among those who deal with both upper and lower classes. Growth of London as a commercial center draws many from the countryside who can fill this socially intermediate role.

The rise of English purists, e.g. Jonathan Swift, who decried the 'degeneration' of English and sought to 'purify' it and fix it forever in unchanging form.

Establishment of English in Australia, South Africa, and India, among other British colonial outposts.

New waves of immigrants to the U.S. Linguistic diversity increases where the newcomers settle, but immigrants repeat the pattern of earlier settlers and lose their language within a generation or two. The culture at large remains resolutely monolingual (despite the fears of cultural purists). But as ever, the language continues to absorb loanwords, continually enriched by the many tongues of the newcomers to these shores.