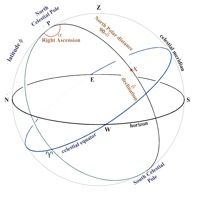 b : equatorial plane <the equator of a dividing cell>

An equator is the intersection of a sphere's surface with the plane perpendicular to the sphere's axis of rotation and containing the sphere's center of mass. The capitalized term Equator refers to the Earth's equator.

In simpler language, the Equator is an imaginary line on the Earth's surface equidistant from the North Pole and South Pole that divides the Earth into a Northern Hemisphere and a Southern Hemisphere. The equators of other planets and astronomical bodies are defined likewise.

Certain navies, such as the Royal Navy and the US Navy, have a tradition of holding ceremonies on board ship to mark sailors' first crossing of the Equator. These rites of initiation have in the past been notorious for their brutality. Milder line-crossing ceremonies, typically featuring King Neptune, are also held for passengers' entertainment on some civilian ocean liners and cruise ships.

Exact length of the Equator