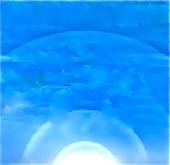 The Eternal Son is the perfect and final expression of the "first" personal and absolute concept of the Universal Father. Accordingly, whenever and however the Father personally and absolutely expresses himself, he does so through his Eternal Son, who ever has been, now is, and ever will be, the living and divine Word. And this Eternal Son is residential at the center of all things, in association with, and immediately enshrouding the personal presence of, the Eternal and Universal Father.

We speak of God's "first" thought and allude to an impossible time origin of the Eternal Son for the purpose of gaining access to the thought channels of the human intellect. Such distortions of language represent our best efforts at contact-compromise with the time-bound minds of mortal creatures. In the sequential sense the Universal Father never could have had a first thought, nor could the Eternal Son ever have had a beginning. But I was instructed to portray the realities of eternity to the time-limited minds of mortals by such symbols of thought and to designate the relationships of eternity by such time concepts of sequentiality.

The Eternal Son is the spiritual personalization of the Paradise Father's universal and infinite concept of divine reality, unqualified spirit, and absolute personality. And thereby does the Son constitute the divine revelation of the creator identity of the Universal Father. The perfect personality of the Son discloses that the Father is actually the eternal and universal source of all the meanings and values of the spiritual, the volitional, the purposeful, and the personal.

In an effort to enable the finite mind of time to form some sequential concept of the relationships of the eternal and infinite beings of the Paradise Trinity, we utilize such license of conception as to refer to the "Father's first personal, universal, and infinite concept." It is impossible for me to convey to the human mind any adequate idea of the eternal relations of the Deities; therefore do I employ such terms as will afford the finite mind something of an idea of the relationship of these eternal beings in the subsequent eras of time. We believe the Son sprang from the Father; we are taught that both are unqualifiedly eternal. It is apparent, therefore, that no time creature can ever fully comprehend this mystery of a Son who is derived from the Father, and yet who is co-ordinately eternal with the Father himself. [1]