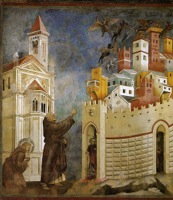 For lessons on the topic of Exorcism, follow this link.

b : to get rid of (something troublesome, menacing, or oppressive)

Exorcism (from Greek ἐξορκισμός, exorkismos - binding by oath) is the religious practice of evicting demons or other spiritual entities from a person or place which they are believed to have possessed. Depending on the spiritual beliefs of the exorcist, this may be done by causing the entity to swear an oath, performing an elaborate ritual, or simply by commanding it to depart in the name of a higher power. The practice is ancient and part of the belief system of many cultures and religions.

Requested and performed exorcisms occurred rarely until the later half of the 20th century where the public saw a sharp rise due to the media attention exorcisms were getting. There was “a 750% increase in the number of exorcisms performed between the early "s 1960s and the mid-1970s”.