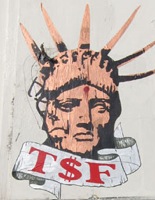 The Latin word factio denoted originally either of the chariot teams that were organised professionally by private companies in ancient Rome, each recognizable by characteristic colour, and arousing supporter hysteria similar to that in modern sports fans. These teams were not unlike gladiator schools, but the lethal nature of that entertainment meant few performers lasted long enough to build up similar crowd loyalty to the "team", while the fighters rarely actually teamed up, but rather fought duels or beasts. In time, political currents could become associated with such a team, although precisely how this happened is unclear. In Byzantine Constantinople, two such chariot factions, blue and green, repeatedly made or broke the claims of candidates to the imperial throne.

Occasionally, the term "faction" is still used more or less as a synonym for political party, but "with opprobrious sense, conveying the imputation of selfish or mischievous ends or turbulent or unscrupulous methods", according to the Oxford English Dictionary. In his Dictionary, Samuel Johnson (a Tory) dismissively defined Whig as "the name of a faction". Similarly, in the tenth instalment of the Federalist Papers, James Madison defines a faction as "a number of citizens, whether amounting to a minority or majority of the whole, who are united and actuated by some common impulse of passion, or of interest, adverse to the rights of other citizens, or to the permanent and aggregate interests of the community." In plain English this is a group that pursues self interest at the expense of the common good.

A political faction is a group of individuals, such as a political party, a trade union, or other group with a common political purpose. A faction or political party may include fragmented sub-factions, “parties within a party," which may be referred to as power blocs, or voting blocs. Members of factions band together as a way of achieving these goals and advancing their agenda and position within an organization.

Factions are not limited to political parties; they can and frequently do form within any group that has some sort of political aim or purpose.

The aims of a political faction are as diverse as the different types of bodies within which they appear. Typically, however, they include: advancing a particular policy or policy agenda, preventing the adoption of alternative policies and supporting given individuals to positions of power within the organization or in the wider political world. A faction can primarily be based around supporting a given person or group, or a single major aim, with little in the way of common agenda otherwise, or it can have a comprehensive and definitive set of policies. Either way, factional politics typically revolve around personality, with a few individuals playing key roles, acting as a magnet for like-minded people, leading the activities of the faction, and acting as a prominent voice for the shared objectives of the faction. Such individuals can be referred to by a variety of names, such as “powerbrokers” or “factional chiefs”.[1]