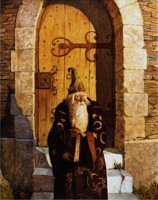 Fantasy is a genre that uses magic and other supernatural forms as a primary element of plot, theme, and/or setting. Many works within the genre take place on fictional planes or planets where magic is common. Fantasy is generally distinguished from science fiction and horror by the expectation that it steers clear of scientific and macabre themes, respectively, though there is a great deal of overlap between the three (which are subgenres of speculative fiction).

In popular culture, the genre of fantasy is dominated by its medievalist form, especially since the worldwide success of the The Lord of the Rings by J. R. R. Tolkien. In its broadest sense however, fantasy comprises works by many writers, artists, filmmakers, and musicians, from ancient myths and legends to many recent works embraced by a wide audience today.

Fantasy is a vibrant area of academic study in a number of disciplines (English, cultural studies, comparative literature, history, medieval studies). Work in this area ranges widely, from the structuralist theory of Tzvetan Todorov, which emphasizes the fantastic as a liminal space, to work on the connections (political, historical, literary) between medievalism and popular culture.

For lessons on the topic of Fantasy, follow this link.

The identifying traits of fantasy are the inclusion of fantastic elements in a self-coherent (internally consistent) setting, where inspiration from mythology and folklore remain a consistent theme. Within such a structure, any location of the fantastical element is possible: it may be hidden in, or leak into the apparently real world setting, it may draw the characters into a world with such elements, or it may occur entirely in a fantasy world setting, where such elements are part of the world. American fantasy, starting with the stories chosen by John W. Campbell, Jr. for the magazine Unknown, is often characterized by internal logic. That is, the events in the story are impossible, but follow "laws" of magic, and have a setting that is internally consistent.[1]