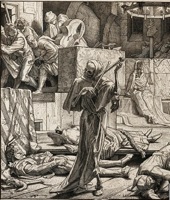 repr. two distinct. Old English words: (1) the simple fáh, fág adj. ( < Old Germanic *faiho-); (2) the compound gefá n. (weak masculine), originally an absolute use of *gefáh adj. (not recorded as such) = Old High German gifêh at feud, odious (Middle High German gevêch, gevê) < Old Germanic *ga-faiho-, where the prefix imports the notion of ‘mutually’ (see y- prefix). As in many other nouns, the prefix ge-, i-, fell away in early Middle English, so that the compound n. and the absolute use of the simple adj. became coincident.

The Germanic adj. *faiho- (represented only in West Germanic) is referred to the Aryan root *peiq- poiq- piq-, whence Old Irish oech enemy ( < poiqos, Greek πικρός bitter, Lithuanian pìkta-s angry. The current statement that the word is etymologically akin to fiend n. depends on the doubtful hypothesis that the root *peiq- is an extension of *pei- to hate.

For lessons on the topic of Enemies (Foes), follow this link.

An enemy (or foe) is an entity that is seen as forcefully adverse or threatening. The term is usually used within the greater context of war, to denote an opposing group as a threat.