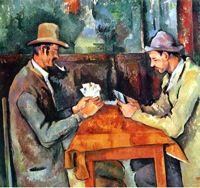 A game is a structured activity, usually undertaken for enjoyment and sometimes used as an educational tool. Games are distinct from work, which is usually carried out for remuneration, and from art, which is more concerned with the expression of ideas. However, the distinction is not clear-cut, and many games are also considered to be work (such as professional players of spectator sports/games) or art (such as jigsaw puzzles or games involving an artistic layout such as Mah-jongg solitaire).

Key components of games are goals, rules, challenge, and interaction. Games generally involve mental or physical stimulation, and often both. Many games help develop practical skills, serve as a form of exercise, or otherwise perform an educational, simulational or psychological role. According to Chris Crawford, the requirement for player interaction puts activities such as jigsaw puzzles and solitaire "games" into the category of puzzles rather than games.[1]

Attested as early as 2600 BC,[2][3] games are a universal part of human experience and present in all cultures. The Royal Game of Ur, Senet, and Mancala are some of the oldest known games.

For lessons on the topic of Game(s), follow this link'.

Each and all of us play the game of truth in every encounter with our fellows. The field is endless and the rules are simple, no one wins alone; the prize awaits the moment when we all have won together. The sphere with which we play is glorious, but ever changing, and with each pass it advances or retreats in splendor, depending on how it is thrown. Some think it should be thrown 'at' another, but of course, it is 'to' them we toss it in advancing levels of artful exchange for it is in this sphere we see in vivid color the reflection of our evolving and collective soul.