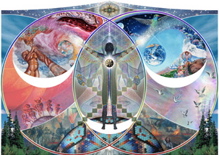 For lessons on the related topic of Super-consciousness, follow this link.

The experience of God-consciousness remains the same from generation to generation, but with each advancing epoch in human knowledge the philosophic concept and the theologic definitions of God must change. God-knowingness, religious consciousness, is a universe reality, but no matter how valid (real) religious experience is, it must be willing to subject itself to intelligent criticism and reasonable philosophic interpretation; it must not seek to be a thing apart in the totality of human experience.[1]