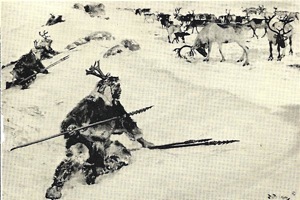 b : a dog used or trained for hunting
c : a horse used or adapted for use in hunting with hounds; especially : a fast strong horse trained for cross-country work and jumping

Hunting is the practice of pursuing living animals (usually wildlife) for food, recreation, or trade. In present-day use, the term refers to lawful hunting, as distinguished from poaching, which is the killing, trapping or capture of the hunted species contrary to applicable law. The species which are hunted are referred to as game and are usually mammals and migratory or non-migratory gamebirds.

Hunting can also involve the elimination of vermin, as a means of pest control to prevent diseases caused by overpopulation. Hunting advocates state that hunting can be a necessary component of modern wildlife management, for example to help maintain a population of healthy animals within an environment's ecological carrying capacity when natural checks such as predators are absent. In the United States, wildlife managers are frequently part of hunting regulatory and licensing bodies, where they help to set rules on the number, manner and conditions in which game may be hunted.

The pursuit, capture and release, or capture for food of fish is called fishing, which is not commonly categorized as a form of hunting. Trapping is also usually considered a separate activity. Neither is it considered hunting to pursue animals without intent to kill them, as in wildlife photography or birdwatching. The practice of hunting for plants or mushrooms is a colloquial term for foraging or gathering.