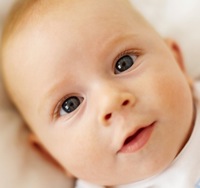 An infant or baby is the very young offspring of humans. A newborn is an infant who is within hours, days, or up to a few weeks from birth. In medical contexts, newborn or neonate (from Latin, neonatus, newborn) refers to an infant in the first 28 days of life (from birth up to 4 weeks after birth, less than a month old). The term "newborn" includes premature infants, postmature infants and full term newborns. The term infant is derived from the Latin word infans, meaning "unable to speak" or "speechless." It is typically applied to children between the ages of 1 month and 12 months; however, definitions vary between birth and 3 years of age. "Infant" is also a legal term referring to any child under the age of legal adulthood.

Attachment theory is primarily an evolutionary and ethological theory whereby the infant or child seeks proximity to a specified attachment figure in situations of alarm or distress for the purpose of survival. The forming of attachments is considered to be the foundation of the infant/child's capacity to form and conduct relationships throughout life. Attachment is not the same as love and/or affection although they often go together. Attachment and attachment behaviors tend to develop between the age of 6 months and 3 years. Infants become attached to adults who are sensitive and responsive in social interactions with the infant, and who remain as consistent caregivers for some time. Parental responses lead to the development of patterns of attachment which in turn lead to 'internal working models' which will guide the individual's feelings, thoughts, and expectations in later relationships. There are a number of attachment 'styles' namely 'secure', 'anxious-ambivalent', 'anxious-avoidant', (all 'organized') and 'disorganized', some of which are more problematic than others. A lack of attachment or a seriously disrupted capacity for attachment could potentially amount to serious disorders.[1]