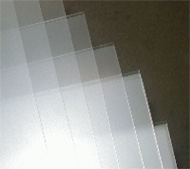 Electrical insulation is the absence of electrical conduction. Electronic band theory (a branch of physics) predicts that a charge will flow whenever there are states available into which the electrons in a material can be excited. This allows them to gain energy and thereby move through the conductor (usually a metal). If no such states are available, the material is an insulator.

Most (though not all, see Mott insulator) insulators are characterized by having a large band gap. This occurs because the "valence" band containing the highest energy electrons is full, and a large energy gap separates this band from the next band above it. There is always some voltage (called the breakdown voltage) that will give the electrons enough energy to be excited into this band. Once this voltage is exceeded, the material ceases being an insulator, and charge will begin to pass through it. However, it is usually accompanied by physical or chemical changes that permanently degrade the material's insulating properties.

Materials that lack electron conduction are insulators if they lack other mobile charges as well. For example, if a liquid or gas contains ions, then the ions can be made to flow as an electric current, and the material is a conductor. Electrolytes and plasmas contain ions and will act as conductors whether or not electron flow is involved.[1]