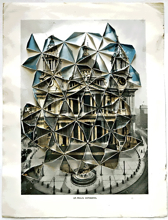 The term intentionality according to the Oxford English Dictionary, is "the distinguishing property of mind of being necessarily directed upon an object, whether real or imaginary". Originally intentionality was a concept from scholastic philosophy but was reintroduced in 19th century philosophy by Franz Brentano in his work Psychology from an Empirical Standpoint. Brentano defined intentionality as one characteristic of "mental phenomena", by which they could be distinguished from "physical phenomena" (physische Phänomene), using such phrases as "reference to a content", the "direction towards an object" and "the immanent objectivity".

For lessons on the topic of Intention, follow this link.

1. The action of straining or directing the mind or attention to something; mental application or effort; attention, intent observation or regard; endeavour. Obs. (but cf. 7b).

3. The way in which anything is to be understood; meaning, significance, import. Obs. or blending with 5.

4. The action of intending or purposing; volition which one is minded to carry out; purpose. of intention, on purpose, intentionally (obs.).

5. a. That which is intended or purposed; a purpose, design.

b. colloq. in pl. Purposes in respect of a proposal of marriage.

6. a. Ultimate purpose; the aim of an action; that for which anything is intended (obs.).

b. In literary criticism: the aim or design which a critic detects in a writer's work.

b. Straining, bending, forcible application or direction (of the mind, eye, thoughts, etc.). (Akin to 1, but with more of the notion of tension as in 7.)

12. Theol. a. One of the three things necessary, according to the Schoolmen, to the effectual administration and validity of a Sacrament, the two others being matter and form: see quots.

b. R.C. Ch. special or particular intention, a special purpose or end for which mass is celebrated, prayers are offered up, etc. as the spiritual welfare of some person, etc.

1880 MUIRHEAD Gaius IV. §41 The clauses of a formula are these,{em}the demonstration, the intention, the adjudication, and the condemnation..The intention is the clause in which the pursuer embodies his demand; for example, thus: ‘Should it appear that Numerius Negidius ought to give ten thousand sesterces to Aulus Agerius’.

15. Special Comb.: intention movement [tr. G. intentionsbewegung (O. Heinroth)], a movement or action on the part of an animal which itself performs no function except to reveal or signal that a further movement or action may follow or is contemplated; intention tremor, a tremor which is manifested when a voluntary action is performed.

Through the works of Husserl, who took it over from Brentano, the concept of intentionality received more widespread attention in current philosophy, both continental and analytic. French philosopher Jean-Paul Sartre, in Being and Nothingness, identified intentionality with consciousness, stating that they were indistinguishable from one another, a position that was a stark contrast to Brentano's position that intentionality is but one quality of mental phenomena. German philosopher Martin Heidegger, in Being and Time, defined intentionality as "care" (Sorge), a sentient condition where an individual's existentialism, facticity, and forfeiture to the world identifies their ontological significance, in contrast to that which is the mere ontic (thinghood).

Other twentieth century philosophers such as Gilbert Ryle and A J Ayer have been critical of Husserl's concept of intentionality and his many layers of consciousness, Ryle insisting that perceiving is not a process and Ayer that describing one's knowledge is not to describe mental processes. The effect of these positions is that consciousness is so fully intentional that the mental act has been emptied of all content and the idea of pure consciousness is that it is nothing (Sartre also referred to "consciousness" as "nothing").

Platonist Roderick Chisholm has revived the Brentano thesis through linguistic analysis, distinguishing two parts to Brentano's concept, the ontological aspect and the psychological aspect. Chisholm's writings have attempted to summarize the suitable and unsuitable criteria of the concept since the Scholastics, arriving at a criterion of intentionality identified by the two aspects of Brentano's thesis and defined by the logical properties that distinguish language describing psychological phenomena from language describing non-psychological phenomena. Chisholm's criteria for the intentional use of sentences are: existence independence, truth-value indifference, and referential opacity.

In current artificial intelligence and philosophy of mind intentionality is a controversial subject and sometimes claimed to be something that a machine will never achieve. John Searle argued for this position with the Chinese room thought experiment, according to which no syntactic operations that occurred in a computer would provide it with semantic content. As he noted in the article, Searle's view was a minority position in artificial intelligence and philosophy of mind.

Whereas humans can conceive with some difficulty 6th order intentionality (Robin Dunbar - 6th Order Intentionality Story[1]), a future superintelligence or could comfortably envision many more. The most complex mental trains of thought, that we can hold fleetingly and with the utmost concentration and effort, will to it be almost effortless.KurzweilAI.net

Is Intentional Idiom problematic for Science?

Chisholm (1956), Anscombe (1957), Geach (1957), and Taylor (1964) all adhere to the former position, namely that intentional idiom is problematic and cannot be integrated with the natural sciences. Members of this category also maintain realism in regard to intentional objects, which may imply some kind of dualism (though this is debatable).

The latter position, which maintains the unity of intentionality with the natural sciences, is further divided into three standpoints:

Intentionality is not problematic for science

Proponents of the eliminative materialism, understand intentional idiom, such as "belief", "desire", and the like, to be replaceable either with behavioristic language (e.g. Quine) or with the language of neuroscience (e.g. Churchland).

Holders of realism argue, in contrast to those in support of C, that there is a deeper fact of the matter to both translation and belief attribution. In other words, manuals for translating one language into another cannot be set up in different yet behaviorally identical ways and ontologically there are intentional objects. Famously, Fodor has attempted to ground such realist claims about intentionality in a language of thought. Dennett comments on this issue, Fodor "attempt[s] to make these irreducible realities acceptable to the physical sciences by grounding them (somehow) in the 'syntax' of a system of physically realized mental representations" (Dennett 1987, 345).

Those who adhere to the so-called Quinean double standard (namely that ontologically there is nothing intentional, but that the language of intentionality is indispensable), accept Quine's thesis of the indeterminacy of radical translation and its implications, while the other positions so far mentioned do not. As Quine puts it, indeterminacy of radical translation is the thesis that "manuals for translating one language into another can be set up in divergent ways, all compatible with the totality of speech dispositions, yet incompatible with one another" (Quine 1960, 27). Quine (1960) and Wilfrid Sellars (1958) both comment on this intermediary position. One such implication would be that there is, in principle, no deeper fact of the matter that could settle two interpretative strategies on what belief to attribute to a physical system. In other words, the behavior (including speech dispositions) of any physical system, in theory, could be interpreted by two different predictive strategies and both would be equally warranted in their belief attribution. This category can be seen to be a medial position between the realists and the eliminativists since it attempts to blend attributes of both into a theory of intentionality. Dennett, for example, argues in "True Believers" (1981) that intentional idiom (or "folk psychology") is a predictive strategy and if such a strategy successfully and voluminously predicts the actions of a physical system, then that physical system can be said to have those beliefs attributed to it. Dennett calls this predictive strategy the intentional stance.

They are further divided into two thesis:

Advocates of the former, the Normative Principle, argue that attributions of intentional idioms to physical systems should be the propositional attitudes that the physical system ought to have in those circumstances (Dennett 1987, 342). However, exponents of this view are still further divided into those who make an Assumption of Rationality and those who adhere to the Principle of Charity. Dennett (1969, 1971, 1975), Cherniak (1981, 1986), and the late Putnam (1983) recommend the Assumption of Rationality, which unsurprisingly assumes that the physical system in question is rational. Donald Davidson (1967, 1973, 1974, 1985) and Lewis (1974) defend the Principle of Charity.

Intentionality should not be confused with intensionality, a concept from semantics though it is related to the modern understanding of intention.