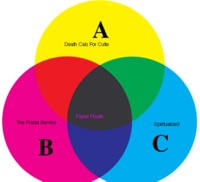 b. Logic and Mathematics. The set which comprises all the elements common to two or more given sets, and no others; also, the operation of forming such a set.

The intersection of A and B is written "A ∩ B". Formally:

If the sets A and B are closed under complement then the intersection of A and B may be written as the complement of the union of their complements, derived easily from De Morgan's laws: A ∩ B = (Ac ∪ Bc)c[1]