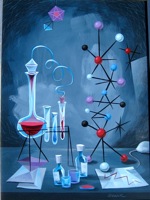 b : a place like a laboratory for testing, experimentation, or practice <the laboratory of the mind>

A laboratory (informally, lab) is a facility that provides controlled conditions in which scientific research, experiments, and measurement may be performed. The title of laboratory is also used for certain other facilities where the processes or equipment used are similar to those in scientific laboratories. These notably include:

In recent years government and private centers for innovation in learning, leadership and organization have adopted "lab" in their name to emphasize the experimental and research-oriented nature of their work.

Scientific laboratories can be found in schools and universities, in industry, in government or military facilities, and even aboard ships and spacecraft. A laboratory might offer work space for just one to more than thirty researchers depending on its size and purpose. ==Characteristics of scientific laboratories Labs used for scientific research take many forms because of the differing requirements of specialists in the various fields of science. A physics lab might contain a particle accelerator or vacuum chamber, while a metallurgy lab could have apparatus for casting or refining metals or for testing their strength. A chemist or biologist might use a wet laboratory, while a psychologist's lab might be a room with one-way mirrors and hidden cameras in which to observe behavior. In some laboratories, such as those commonly used by computer scientists, computers (sometimes supercomputers) are used for either simulations or the analysis of data collected elsewhere. Scientists in other fields will use still other types of laboratories. Despite the great differences among laboratories, some features are common. The use of workbenches or countertops at which the scientist may choose to either sit or stand is a common way to ensure comfortable working conditions for the researcher, who may spend a large portion of his or her working day in the laboratory. The provision of cabinets for the storage of laboratory equipment is quite common. It is traditional for a scientist to record an experiment's progress in a laboratory notebook, but modern labs almost always contain at least one computer workstation for data collection and analysis.[1]