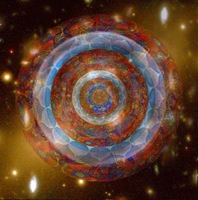 Light, or visible light, is electromagnetic radiation of a wavelength that is visible to the human eye (about 400–700 nanometre. In a scientific context, the word light is sometimes used to refer to the entire electromagnetic spectrum.[1] (What Is a Light Source?) Light is composed of an elementary particle called a photon.

Three primary properties of light are:

Light can exhibit properties of both waves and particles. This property is referred to as wave-particle duality. The study of light, known as optics, is an important research area in modern physics.

For lessons on the topic of Light, follow this link.

Another, more accurate, measurement of the speed of light was performed in Europe by Hippolyte Fizeau in 1849. Fizeau directed a beam of light at a mirror several kilometers away. A rotating cog wheel was placed in the path of the light beam as it traveled from the source, to the mirror and then returned to its origin. Fizeau found that at a certain rate of rotation, the beam would pass through one gap in the wheel on the way out and the next gap on the way back. Knowing the distance to the mirror, the number of teeth on the wheel, and the rate of rotation, Fizeau was able to calculate the speed of light as 313,000,000 m/s.

Léon_Foucault used an experiment which used rotating mirrors to obtain a value of 298,000,000 m/s in 1862. Albert A. Michelson conducted experiments on the speed of light from 1877 until his death in 1931. He refined Foucault's methods in 1926 using improved rotating mirrors to measure the time it took light to make a round trip from Mt. Wilson to Mt. San Antonio in California. The precise measurements yielded a speed of 299,796,000 m/s.[2]

The sensory perception of light plays a central role in spirituality (vision, enlightenment), and the presence of light as opposed to its absence (darkness) is a common Western metaphor of good and evil, knowledge and ignorance, and similar concepts.

Mind is a phenomenon connoting the presence-activity of living ministry in addition to varied energy systems; and this is true on all levels of intelligence. In personality, mind ever intervenes between spirit and matter; therefore is the universe illuminated by three kinds of light: material light, intellectual insight, and spirit luminosity.

Light--spirit luminosity--is a word symbol, a figure of speech, which connotes the personality manifestation characteristic of spirit beings of diverse orders. This luminous emanation is in no respect related either to intellectual insight or to physical-light manifestations.[3]