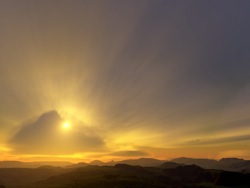 The age of light and life is the final evolutionary attainment of a world of time and space. From the early times of primitive man, such an inhabited world has passed through the successive planetary ages—the pre- and the post-Planetary Prince ages, the post-Adamic age, the post-Magisterial Son age, and the postbestowal Son age. And then is such a world made ready for the culminating evolutionary attainment, the settled status of light and life, by the ministry of the successive planetary missions of the Trinity Teacher Sons with their ever-advancing revelations of divine truth and cosmic wisdom. In these endeavors the Teacher Sons enjoy the assistance of the Brilliant Evening Stars always, and the Melchizedeks sometimes, in establishing the final planetary age.

For lessons on the topic of Light and Life, follow this link.

This era of light and life, inaugurated by the Teacher Sons at the conclusion of their final planetary mission, continues indefinitely on the inhabited worlds. Each advancing stage of settled status may be segregated by the judicial actions of the Magisterial Sons into a succession of dispensations; but all such judicial actions are purely technical, in no way modifying the course of planetary events.

Only those planets which attain existence in the main circuits of the superuniverse are assured of continuous survival, but as far as we know, these worlds settled in light and life are destined to go on throughout the eternal ages of all future time.

Light is revelation - life is evolution, and you are the meeting of these two. You have discerned that this light is the presence of God in you, this inner spiritual luminosity transmuting into mindal enlightenment, becoming that light which so shines that it blesses all others.

Light is, has been, and will be always. Life is creation becoming the reflection of light, this pure, unadulterated luminosity of God animated, directionalized, and refracted through us. This is the way for He desires to experience the full spectrum in the display of luminosity. - Elyon