Difference between revisions of "Machiventa" 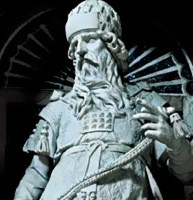 Statue in the Borghese Chapel of the Basilica di Santa Maria Maggiore.

It was 1,973 years before the birth of Jesus that Machiventa was bestowed upon the human races of Urantia. His coming was unspectacular; his materialization was not witnessed by human eyes. He was first observed by mortal man on that eventful day when he entered the tent of Amdon, a Chaldean herder of Sumerian extraction. And the proclamation of his mission was embodied in the simple statement which he made to this shepherd, "I am Melchizedek, priest of El Elyon, the Most High, the one and only God."

When the herder had recovered from his astonishment, and after he had plied this stranger with many questions, he asked Melchizedek to sup with him, and this was the first time in his long universe career that Machiventa had partaken of material food, the nourishment which was to sustain him throughout his ninety-four years of life as a material being.

And that night, as they talked out under the stars, Melchizedek began his mission of the revelation of the truth of the reality of God when, with a sweep of his arm, he turned to Amdon, saying, "El Elyon, the Most High, is the divine creator of the stars of the firmament and even of this very earth on which we live, and he is also the supreme God of heaven."

Within a few years Melchizedek had gathered around himself a group of pupils, disciples, and believers who formed the nucleus of the later community of Salem. He was soon known throughout Palestine as the priest of El Elyon, the Most High, and as the sage of Salem. Among some of the surrounding tribes he was often referred to as the sheik, or king, of Salem. Salem was the site which after the disappearance of Melchizedek became the city of Jebus, subsequently being called Jerusalem.

In personal appearance, Melchizedek resembled the then blended Nodite and Sumerian peoples, being almost six feet in height and possessing a commanding presence. He spoke Chaldean and a half dozen other languages. He dressed much as did the Canaanite priests except that on his breast he wore an emblem of three concentric circles, the Satania symbol of the Paradise Trinity. In the course of his ministry this insignia of three concentric circles became regarded as so sacred by his followers that they never dared to use it, and it was soon forgotten with the passing of a few generations.

Though Machiventa lived after the manner of the men of the realm, he never married, nor could he have left offspring on earth. His physical body, while resembling that of the human male, was in reality on the order of those especially constructed bodies used by the one hundred materialized members of Prince Caligastia's staff except that it did not carry the life plasm of any human race. Nor was there available on Urantia the tree of life. Had Machiventa remained for any long period on earth, his physical mechanism would have gradually deteriorated; as it was, he terminated his bestowal mission in ninety-four years long before his material body had begun to disintegrate.

Currently Machiventa is the Planetary Prince of Urantia, and among his many other titles, is known as the Dean of Melchizedek Extension Schools operating on this planet that is often referred to in The Teaching Mission, but his activities on behalf of this planet are, for the most part, above and beyond the range of ordinary human perception.