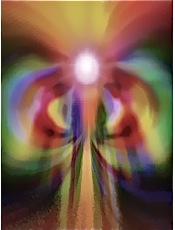 Majeston is a true person, the personal and infallible center of reflectivity phenomena in all seven superuniverses of time and space. He maintains permanent Paradise headquarters near the center of all things at the rendezvous of the Seven Master Spirits. He is concerned solely with the co-ordination and maintenance of the reflectivity service in the far-flung creation; he is not otherwise involved in the administration of universe affairs.

Majeston is not included in our catalogue of Paradise personalities because he is the only existing personality of divinity created by the Supreme Being in functional liaison with the Deity Absolute. He is a person, but he is exclusively and apparently automatically concerned with this one phase of universe economy; he does not now function in any personal capacity with relation to other (nonreflective) orders of universe personalities.

The creation of Majeston signalized the first supreme creative act of the Supreme Being. This will to action was volitional in the Supreme Being, but the stupendous reaction of the Deity Absolute was not foreknown. Not since the eternity-appearance of Havona had the universe witnessed such a tremendous factualization of such a gigantic and far-flung alignment of power and co-ordination of functional spirit activities. The Deity response to the creative wills of the Supreme Being and his associates was vastly beyond their purposeful intent and greatly in excess of their conceptual forecasts.

We stand in awe of the possibility of what the future ages, wherein the Supreme and the Ultimate may attain new levels of divinity and ascend to new domains of personality function, may witness in the realms of the deitization of still other unexpected and undreamed of beings who will possess unimagined powers of enhanced universe co-ordination. There would seem to be no limit to the Deity Absolute's potential of response to such unification of relationships between experiential Deity and the existential Paradise Trinity.