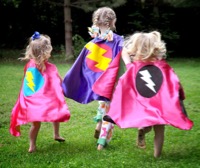 Make believe is a loosely structured form of role-playing that generally has no rules except to stay in character, and requires no specific props. Participants in games of make believe may draw upon many sources for inspiration. Sometimes described as book-related pretend play, wherein children draw upon texts to initiate games. Children seem most interested in texts with, for example, significant levels of tension. Children engage in make believe for a number of reasons. Play allows children to "deal with fears in a safe setting." It also allows them to "indulge their secret fantasies."