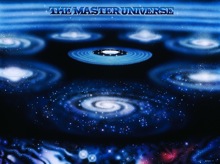 Your world, Urantia, is one of many similar inhabited planets which comprise the local universe of Nebadon. This universe, together with similar creations, makes up the superuniverse of Orvonton, from whose capital, Uversa, our commission hails. Orvonton is one of the seven evolutionary superuniverses of time and space which circle the never-beginning, never-ending creation of divine perfection—the central universe of Havona. At the heart of this eternal and central universe is the stationary Isle of Paradise, the geographic center of infinity and the dwelling place of the eternal God.

The seven evolving superuniverses in association with the central and divine universe, we commonly refer to as the grand universe; these are the now organized and inhabited creations. They are all a part of the master universe, that embraces the uninhabited but mobilizing universes of outer space. [1]