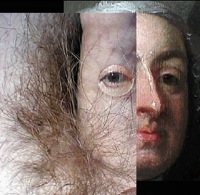 Among humans, mongrel is a pejorative term for the mixing of races, known as miscegenation

The term "miscegenation" has been used since the nineteenth century to refer to interracial marriage and interracial sex, and more generally to the process of racial admixture, which has taken place since ancient history but has become more global through European colonialism since the Age of Discovery. Historically the term has been used in the context of laws banning interracial marriage and sex, so-called anti-miscegenation laws. It is therefore a loaded and potentially offensive word.