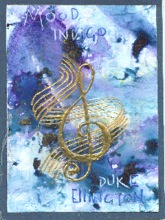 A mood is a relatively long lasting emotional state. Moods differ from simple emotions in that they are less specific, less intense, and less likely to be triggered by a particular stimulus or event.[1]

Moods generally have either a positive or negative valence. In other words, people typically speak of being in a good mood or a bad mood. Unlike acute, emotional feelings like fear and surprise, moods often last for hours or days.

Mood also differs from temperament or personality traits which are even longer lasting. Nevertheless, personality traits such as optimism and neuroticism predispose certain types of moods. Long term disturbances of mood such as depression and bipolar disorder are considered mood disorders. Mood is an internal, subjective state, but it often can be inferred from posture and other behaviors.

For lessons on the topic of Mood, follow this link.

Etymologically, mood derives from the Old English mōd which denoted military courage, but could also refer to a person's humour, temper, or disposition at a particular time. The cognate Gothic mōds translates to both θυμός "mood, spiritedness" and οργή "anger". According to psychologist Robert Thayer, mood is a product of two dimensions: energy and tension.[2] A person can be energetic or tired while also being tense or calm. According to Thayer, people feel best when they are in a calm-energy mood. They feel worse when in a tense-tired state. People often use food to regulate mood. Thayer identifies a fundamental food-mood connection[3] , and advises against the reliance on food as a mood regulator. The low energy arousal coupled with tension, as experienced in a bad mood, can be counteracted by walking. Thayer suggests walking as a means to enhanced happiness.