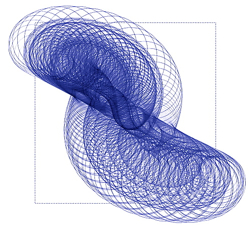 Morontia is a term designating a vast level intervening between the material and the spiritual. It may designate personal or impersonal realities, living or nonliving energies. The warp of morontia is spiritual; its woof is physical.

Just as a butterfly emerges from the caterpillar stage, so will the true personalities of human beings emerge on the mansion worlds, for the first time revealed apart from their onetime enshroudment in the material flesh. The morontia career in the local universe has to do with the continued elevation of the personality mechanism from the beginning morontia level of soul existence up to the final morontia level of progressive spirituality.

It is difficult to instruct you regarding your morontia personality forms for the local universe career. You will be endowed with morontia patterns of personality manifestability, and these are investments which, in the last analysis, are beyond your comprehension. Such forms, while entirely real, are not energy patterns of the material order which you now understand. They do, however, serve the same purpose on the local universe worlds as do your material bodies on the planets of human nativity.

For lessons on the topic of Morontia, follow this link.

To a certain extent, the appearance of the material body-form is responsive to the character of the personality identity; the physical body does, to a limited degree, reflect something of the inherent nature of the personality. Still more so does the morontia form. In the physical life, mortals may be outwardly beautiful though inwardly unlovely; in the morontia life, and increasingly on its higher levels, the personality form will vary directly in accordance with the nature of the inner person. On the spiritual level, outward form and inner nature begin to approximate complete identification, which grows more and more perfect on higher and higher spirit levels.

In the morontia estate the ascending mortal is endowed with the Nebadon modification of the cosmic-mind endowment of the Master Spirit of Orvonton. The mortal intellect, as such, has perished, has ceased to exist as a focalized universe entity apart from the undifferentiated mind circuits of the Creative Spirit. But the meanings and values of the mortal mind have not perished. Certain phases of mind are continued in the surviving soul; certain experiential values of the former human mind are held by the Adjuster; and there persist in the local universe the records of the human life as it was lived in the flesh, together with certain living registrations in the numerous beings who are concerned with the final evaluation of the ascending mortal, beings extending in range from seraphim to Universal Censors and probably on beyond to the Supreme.

Creature volition cannot exist without mind, but it does persist in spite of the loss of the material intellect. During the times immediately following survival, the ascending personality is in great measure guided by the character patterns inherited from the human life and by the newly appearing action of morontia mota. And these guides to mansonia conduct function acceptably in the early stages of the morontia life and prior to the emergence of morontia will as a full-fledged volitional expression of the ascending personality.

There are no influences in the local universe career comparable to the seven adjutant mind-spirits of human existence. The morontia mind must evolve by direct contact with cosmic mind, as this cosmic mind has been modified and translated by the creative source of local universe intellect--the Divine Minister.

Mortal mind, prior to death, is self-consciously independent of the Adjuster presence; adjutant mind needs only the associated material-energy pattern to enable it to operate. But the morontia soul, being superadjutant, does not retain self-consciousness without the Adjuster when deprived of the material-mind mechanism. This evolving soul does, however, possess a continuing character derived from the decisions of its former associated adjutant mind, and this character becomes active memory when the patterns thereof are energized by the returning Adjuster.

The persistence of memory is proof of the retention of the identity of original selfhood; it is essential to complete self-consciousness of personality continuity and expansion. Those mortals who ascend without Adjusters are dependent on the instruction of seraphic associates for the reconstruction of human memory; otherwise the morontia souls of the Spirit-fused mortals are not limited. The pattern of memory persists in the soul, but this pattern requires the presence of the former Adjuster to become immediately self-realizable as continuing memory. Without the Adjuster, it requires considerable time for the mortal survivor to re-explore and relearn, to recapture, the memory consciousness of the meanings and values of a former existence.

The soul of survival value faithfully reflects both the qualitative and the quantitative actions and motivations of the material intellect, the former seat of the identity of selfhood. In the choosing of truth, beauty, and goodness, the mortal mind enters upon its premorontia universe career under the tutelage of the seven adjutant mind-spirits unified under the direction of the spirit of wisdom. Subsequently, upon the completion of the seven circles of premorontia attainment, the superimposition of the endowment of morontia mind upon adjutant mind initiates the prespiritual or morontia career of local universe progression.

When a creature leaves his native planet, he leaves the adjutant ministry behind and becomes solely dependent on morontia intellect. When an ascender leaves the local universe, he has attained the spiritual level of existence, having passed beyond the morontia level. This newly appearing spirit entity then becomes attuned to the direct ministry of the cosmic mind of Orvonton. [1]

The morontia senses are seventy, and the higher spiritual orders of reaction response vary in different types of beings from seventy to two hundred and ten. (14:2.3)