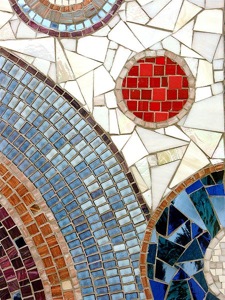 Mosaic is the art of creating images with an assemblage of small pieces of colored glass, stone, or other materials. It may be a technique of decorative art, an aspect of interior decoration, or of cultural and spiritual significance as in a cathedral. Small pieces, normally roughly cubic, of stone or glass of different colors, known as tesserae, (diminutive tessellae), are used to create a pattern or picture.[1]