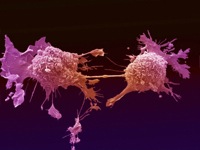 b : an individual, strain, or trait resulting from mutation

Mutations are changes in the DNA sequence of a cell's genome and are caused by radiation, viruses, transposons and mutagenic chemicals, as well as errors that occur during meiosis or DNA replication. They can also be induced by the organism itself, by cellular processes such as hypermutation.

Mutation can result in several different types of change in DNA sequences; these can either have no effect, alter the product of a gene, or prevent the gene from functioning properly or completely. Studies in the fly Drosophila melanogaster suggest that if a mutation changes a protein produced by a gene, this will probably be harmful, with about 70 percent of these mutations having damaging effects, and the remainder being either neutral or weakly beneficial. Due to the damaging effects that mutations can have on cells, organisms have evolved mechanisms such as DNA repair to remove mutations. Therefore, the optimal mutation rate for a species is a trade-off between costs of a high mutation rate, such as deleterious mutations, and the metabolic costs of maintaining systems to reduce the mutation rate, such as DNA repair enzymes. Viruses that use RNA as their genetic material have rapid mutation rates, which can be an advantage since these viruses will evolve constantly and rapidly, and thus evade the defensive responses of e.g. the human immune system.[1]